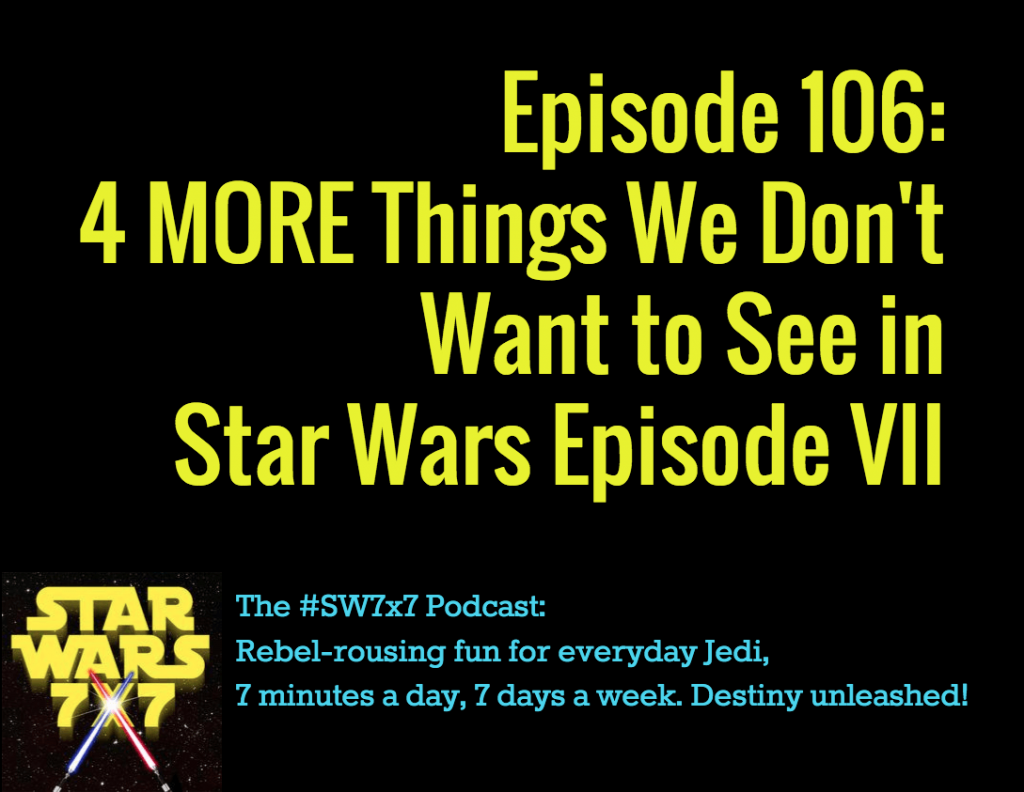 Today we bring balance to the Force, and by that I simply mean, Episodes 103 and 104 were each about 4 different things Star Wars Episode VII has to have, and 105 was about four things we don’t want to see. So this being Episode 106, let’s round it out with four more things we definitely don’t want to see in the new Star Wars movies.

1. Aliens speaking English. Or “Basic,” if you will. Think of Star Wars. Chewie, Ponda Baba, Greedo, Garindan, Jawas, Tusken Raiders. All speaking their native languages, subtitled as needed. Which sounded fantastic, right? Compare that to The Phantom Menace. Nute Gunray and the Neimoidians, Jar Jar and the Gungans, Watto…you get the drift. Hey, at least they got it right with Sebulba and Jabba! But anytime one of those other folks opened up their vocalizers…well, come on. We’re fine with subtitles, moviemakers. We can take it. My 7-year-old likes to read them out loud by himself now.

2. Reincarnations. In the Expanded Universe, Palpatine – or “Sheev” Palpatine, since his first name has finally been revealed, courtesy of the upcoming novel Star Wars: Tarkin – wouldn’t you have loved to be in the room for the brainstorming session around picking his name, by the way? Anyway, Palpatine comes back with his spirit inside clone bodies a couple of times. I can’t say I’ve read any of those ones, and yet I’m happy to say that if the new Star Wars movies are supposed to focus on the next generation, then I certainly hope that applies to the villains as much as it does the heroes.

3. Safety. As much as I hate to say it, I want to see at least one of our Original Trilogy main characters get killed in Star Wars VII, and I fear that the moviemaking team won’t have the courage to do it. I think Kasdan and Abrams might consider going there, but I can’t imagine Lucas, Disney, or Kennedy/Marshall being willing to do it. I hate to say it because of course I don’t want Han, Luke, Leia, or Chewie to die in the movies. But from a story perspective, I think at least one of them has to die, in order for the movie to be credible. It would be appropriate for it to be Luke, since we lost Qui-Gon in Episode I, and Obi-Wan in Episode IV. Then, of course, Harrison Ford has long said he thought Han should have died in Empire. Will he get the death scene he’s been waiting 35 years to perform? We lost Chewie in the Expanded Universe, which was supposed to give us the idea that no one was safe in the old novels. I think we need to raise the stakes.

4. The same planets. There have been rumors circulating that suggest the action in Episode VII could return to planets and moons seen in previous movies. So let’s have the rundown. In the Original Trilogy, we saw Tatooine, Yavin, Hoth, Dagobah, Bespin, and Endor. In the Prequel Trilogy, we saw Naboo, Coruscant, Kamino, Geonosis, Utapau, Kashyyyk, Alderann, and Mustafar. Not a lot, really! Yes, we saw more in the Order 66 montage, but I’m not counting those for the purposes of this discussion. The point is, I get why we might see Coruscant again as the seat of galactic power, and Tatooine, because it’s appeared in 5 out of the 6 previous movies. But there’s so much more galaxy to explore! We know that for sure from the Clone Wars cartoons, but even more interestingly, Kessel has been a known planet from the very beginning, and it finally showed up visually for the first time in Star Wars Rebels, 37 years later. I’d be fine to see more of the Order 66 planets we got a sneak peek at, or any of the planets from the cartoons depicted in live action. And even as much as I love Hoth, I’m good with Empire. No need to go back to that well. Let’s keep things fresh, shall we?

Now, it’s your turn again! What do you want to see or not see in the new movies? Have your say at Facebook.com/sw7x7! 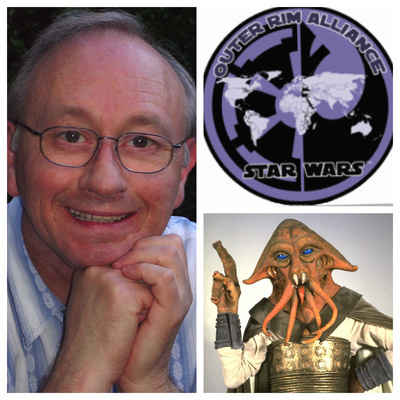 Did you know? The Star Wars Outer Rim Alliance has rebooted itself! Started by actor Gerald Home in 2007 (who played Tessek the Quarren and a Mon Calamari officer in Return of the Jedi) and continued by Richard LeParmentier (Admiral Motti from Star Wars), the worldwide fan network had been dark for a couple of years, until Gerald stepped back in after Richard passed away in April of last year. Now the Alliance is recruiting new members and fan organizations throughout the world! We’re mentioning it because it’s Gerald’s birthday today, and we wish him the best with the next chapter of SWORA.

Never Tell Me the Odds T-shirt – click the pic for details!