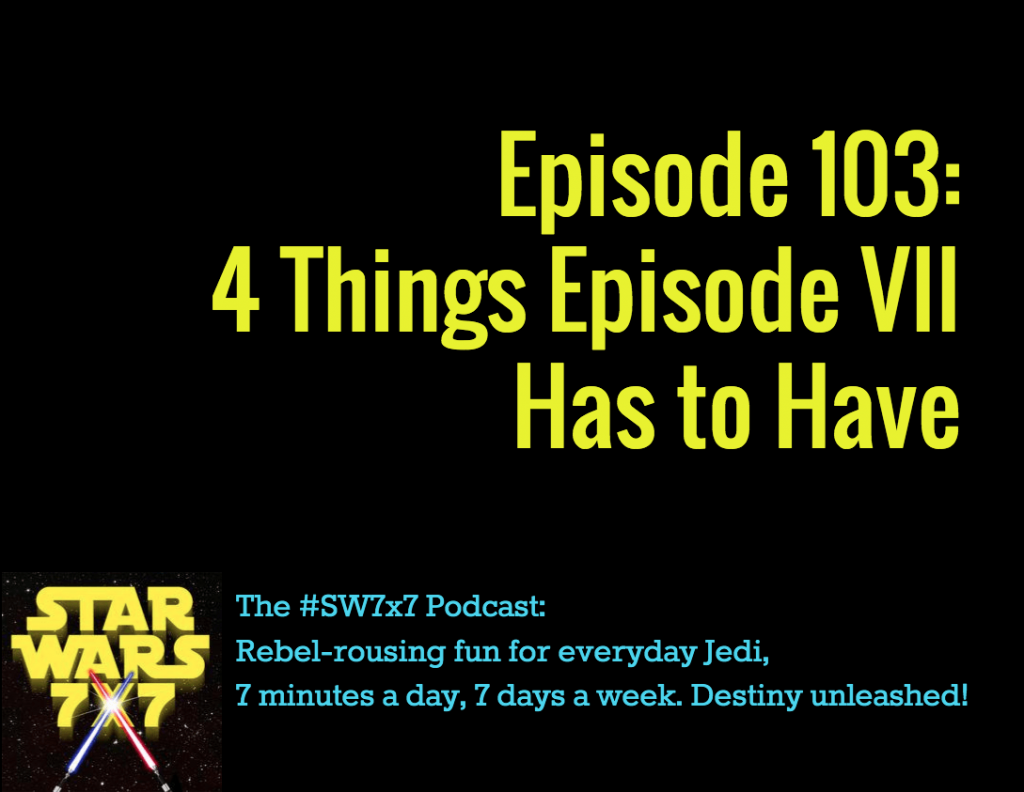 On the one hand, fresh blood is a great thing. Think about how Empire tops the list of best Star Wars movies and you know exactly what I mean. Yet many folks think Return of the Jedi is the weakest of the Original Trilogy movies, so maybe fresh blood isn’t always all it’s cracked up to be.

The good news for all of us Star Wars fans is, J.J. Abrams has a core group of creative around him who are just as intimately familiar with the voice, tone, look, and feel of Star Wars as Lucas was himself. Additionally, because the movies are being developed based on treatments from Lucas himself, I’ve got a high level of confidence in the movie. Lucas truly knows a good story, even if his own execution of one doesn’t always make people happy.

I’m excited to see how J.J. brings his own style to the Star Wars universe, and there are also a few things – dare I say, traditions? –I really think have to be in the movie in order for it to feel like a Star Wars movie. Here’s my list, and I’ve love to hear yours! Share it at Facebook.com/sw7x7.

1. Dismemberments! Supposedly, Lucas himself has said something along the order of, “You play with swords, things are going to get cut off.” I think of all the swordplay in the Lord of the Rings and Hobbit movies recently, and somehow, there’s precious little dismemberment happening. Beheadings, for sure, but not a lot of limbs cut off. The Star Wars movies have something like two dozen in total. Somebody’s hands, arms, or legs better get cut off in Episode VII, is all I’m saying.

2. Insults! One of the things I think I missed the most in the Prequel Trilogy was people sniping at each other the way they did in the Original Trilogy. And, come to think of it, it might be why Return of the Jedi is my least favorite of the OT movies. Everybody loves each other in that one. And it’s quite possibly why I like young Obi-Wan the best of all the characters in the prequels. Even C-3PO was mild compared to how he was in the OT. Is it possible he’s gotten more crotchety as he’s gotten older? If so, then we should hear some real gems from him this time around.

3. The Sith! So about this Darth Bane “Rule of Two” thing, a master and an apprentice…it doesn’t really work that way, does it? And I mean that in a couple of ways. First off, even though we didn’t see it in the movies, didn’t Palpatine have both Darth Maul and Darth Tyrannus as his apprentices at the same time? And secondly, the Expanded Universe had Sith users of the force and Force-sensitive beings like Inquisitors and Assassins, and Star Wars Rebels now features a character call the Inquisitor, who wields a lightsaber and has been trained in the use of the dark side of the Force. Who exists, of course, alongside the Emperor and Darth Vader. And even my 1st grader can tell you that’s one Sith too many. So they’re gonna have to clarify that for us. Back to the point, though, the EU certainly had stories where the Sith weren’t involved and yet threats to the New Republic existed. But the core Star Wars stories involved the Jedi vs. Sith dynamic. And that needs to be an important part of the plot. As does the next thing…

4. Family issues! The Skywalker line of Force-sensitive humans is brand new from an in-universe perspective. Shmi was never suggested to be Force-sensitive herself, and of course Anakin is the product of an immaculate conception. And we only have Luke and Leia as his offspring. Yes, the EU brings us their four children (Jaina, Jacen, and Anakin Solo, and Ben Skywalker), and some of the fresh faces of Episode VII are assumed to be the children of Luke and/or Han and Leia. But interestingly, there have been absolutely no rumors or leaks at all about that, only speculation. That being said, the story is supposed to be about the next generation, and the Skywalker line has already been shown to go both light and dark side. What do you do when your kid goes to the dark side, the way Jacen did in the EU? I think we should find out in the new movies.

And again, that’s my take! What do you think should be in the new movie? Let ‘er rip in the comments for this show’s post!

Gungans believe in Santa Claus! Or at least, they like to dress up, since there’s a moment in Otah Gunga, the Gungan City in The Phantom Menace, where a Gungan nearby Qui-Gon can be seen wearing a Santa Claus hat. And you thought they were silly already – you had no idea!

Disappeared my voice once again has. Love karaoke very much I do. Yesssss.

Today’s question: What type of ship was Gold Squadron composed of, in the first Death Star battle?