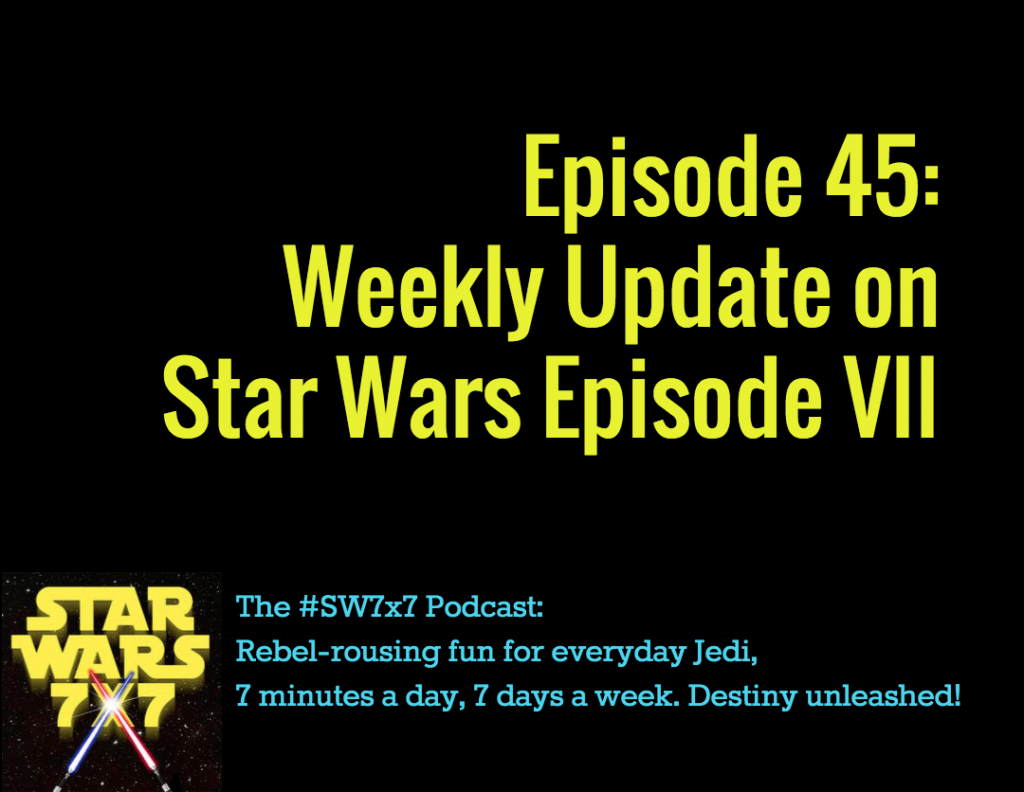 Did you know? There are CGI effects in movies, and there’s what they call “practical” effects, the kind of special effect that’s produced in the real world. Squibs for gunshot wounds, sprinkler systems for rain, dry ice for fog, puppets and prosthetics – all of those and more are practical effects. We’ll talk about why that matters in the Force Feature!

Yesterday’s answer: A glove over his mechanical hand

Today’s question: What animal was Luke “strong enough to pull the ears off of,” according to Han?

This is the start of a series of weekly updates about Star Wars VII, and while we’ve said previously that we’ll have a no-spoilers policy here at Star Wars 7×7, we’re going to tread a fine line with that.

The fact is, none of us in this day and age are going to be able to avoid everything out there. Maybe people out hiking the Appalachian Trail for six months or more will be able to. We’ll probably hear news stories soon about a few random people going to extreme measures to avoid hearing anything about it. Caves, mobile homes, the middle of the Saraha Desert…you get the idea.

I just re-discovered my stash of old Bantha Tracks issues – remember those? That was the newsletter of the official Star Wars Fan Club back in the day. And even then, we weren’t kept totally in the dark about upcoming Star Wars stuff. There was just enough information shared to keep us pining for more.

So we’re going to use that philosophy to inform how we report on news about Episode 7 for this podcast. Anything that an official source has revealed is fair game – that means via Lucasfilm/Disney, StarWars.com, JJ Abrams and Bad Robot Productions, or any of the actors.

There are many other sites, including Latino Review, Indierevolver, and others that are sharing rumors and leaks from various sources. We’re catching and posting links to those breaking news items on Twitter at @SW7x7Podcast, so follow that if you don’t mind the potential spoilers.

As for you tuning into the podcast itself, we’re going to stop short on the full reveals, and only tell you the basics of what people are talking about. After that, if you want to dive deeper, you’re only a Twitter feed or Google search away.

That said, there’s also the possibility the powers that be have sown disinformation among the rumors, so take that under advisement. The five big news stories around Episode VII this week are:

1. The robotic hand. JJ Abrams tweeted out a pic of his handwritten notecard thanking everyone who contributed more than $5 million to the Force for Change fundraising campaign for UNICEF Innovation Labs, and we’re proud to be a Founding Member of that campaign. But the thank you card was being held by a robotic hand. Whose hand is it? The rumor mill is already up and running…

2. Han Solo’s costumes. A couple of design sketches have been posted that show what Han could be dressed like for Episode VII.

3. New buckets. First a sketch, then full-fledged images of helmets for Stormtroopers and either a Snowtrooper or a Jungletrooper were leaked this week. There had been rumors earlier this year about filming in Iceland, so I’m not so sure about the jungle thing.

4. Villains. If you really want to know who the baddies are this time around – and again, I’m not going to say it in here, so you don’t have to shut off the podcast right this second –  there’s a big discussion happening about who he/she/it may be, and who in the announced cast may be playing on Team Bad Guys. I’ve read it, and I’m definitely intrigued.

5. Practical effects. Rian Johnson, who’s set to direct Episodes VIII and IX, talked about his visit to the set of Episode VII, and how there’s a lot of building happening there. He’s talking about how the movie is heading very strongly toward practical effects – the old school stuff, and not leaning too heavily on CGI effects. Personally, I’m over-the-moon thrilled about that, because I think that’s going to deliver the best of all possible worlds for us fans.

So here’s the deal: All of these items are linked from our website to their sources, so if you want to go further, you can. Otherwise, let this be a little teaser for you!