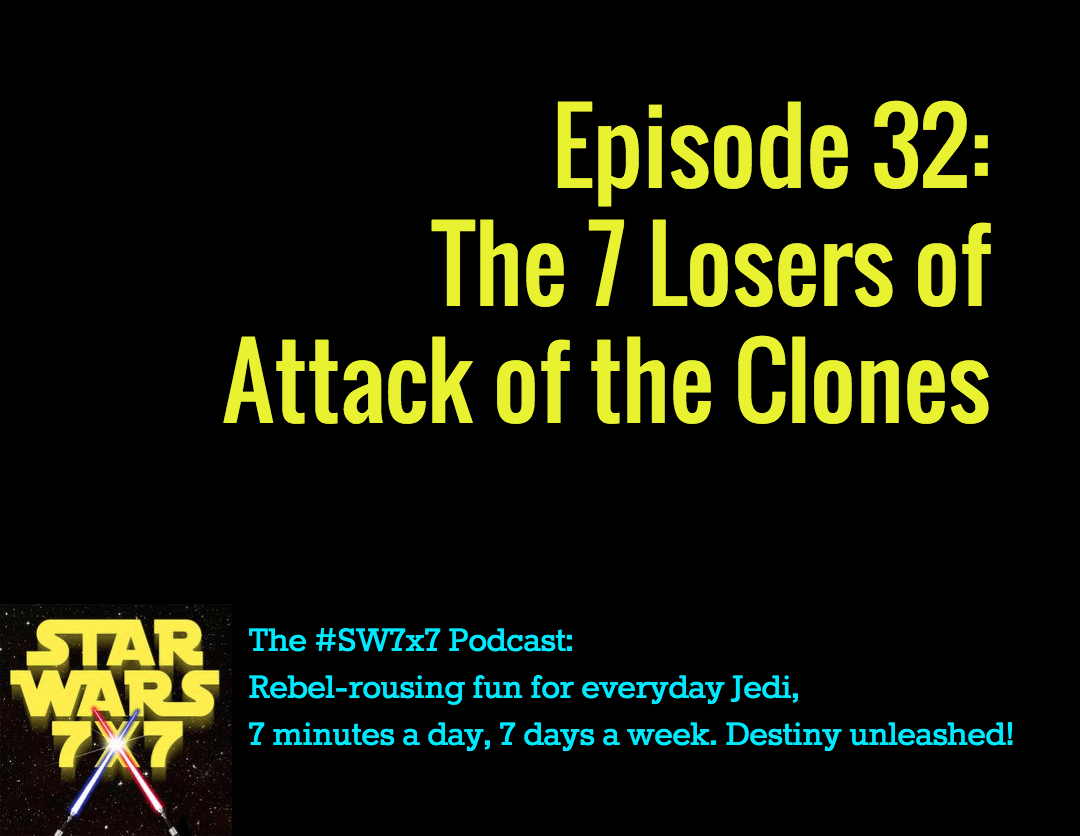 Today we celebrate, the man, the myth, the legend, Sir Alec Guinness, who passed away on this date in 2000. Share your favorite Obi-Wan lines of his in the comments, and let’s hear about some of your favorite non-Star Wars Alec Guinness performances, too!

Star Wars as a gif is seriously impressive: http://t.co/KpShtX6QPq

Yesterday’s answer: Jabba the Hutt, in the opening crawl for Jedi

Today’s question: Who wasn’t at his post in Star Wars?

Force Feature: The 7 Losers of Attack of the Clones

Today, we’re talking about the losers in Attack of the Clones – the folks whose fates and fortunes took a turn for the worse as a result of the events of the movie. The one ground rule of this is that the winner had to either appear or be mentioned by name in the movie to qualify.

#7: R2-D2. In one of his rare failures, doesn’t detect the assassination attempt on Padme. He gets stuck accompanying Padme and Anakin on their romantic, heavy-breathing getaway, and when he finally gets a chance to get in on the action, he dumps Padme into the arms of the Geonosians, and has to spend the rest of his time trying to put C-3PO back together while being subjected to bad puns. “This is such a drag!”

#6: Boba Fett. If he kills Obi-Wan on Kamino, the Jedi never find out about Geonosis, and thus there’s no battle there, and Jango lives to fight another day and keeps getting paid to be a clone daddy. Instead, he has to watch Mace Windu decapitate Jango. But it was all worth it, because the fans love Boba Fett, right?

#5: Obi-Wan Kenobi. Umm, Obi-Wan, whatever “training” you’re giving Anakin, it’s not working… he won’t stay on Naboo, he won’t stay on Tatooine, he’s too aggressive with Count Dooku, he’s getting all hot and bothered over Padme…maybe these should have been your first signs of warning that things weren’t going according to plan.

#4: The Jedi Council. A whole army – and all the equipment and vehicles and starships, too, let’s not forget that – plus yet another Sith out and about in the universe, and it all happened without the Jedi knowing it. “Our ability to use the Force has diminished,” Mace Windu says? Maybe if the Council had been less Ki-Adi-Mundi (“Impossible! The Sith are extinct!”) and a little more Mace-y (“This party’s over!”), they wouldn’t be in this mess.

#3: Jedi Master Sifo-Dyas. Speaking of Jedi fails, this one may be one of the biggest. It isn’t canon, but he ordered up the clone army and got the money on the sly from big-time financial mover and shaker Hego Damask, who was really Palpatine’s then Sith Lord, Darth Plagueis. And then his former best Jedi friend kills him, to prove he’s ready to move over to the Dark Side. That best friend was Darth Tyrannus, better known as Count Dooku.

#2: Jocasta Nu. “If an item does not appear in our records, it does not exist.” Look, just out of high school I worked in the Los Angeles Public Library system for a number of years. I can tell you that 99% of librarians are not like this stereotype. But the few who are, REALLY are, so when you see them get a fact wrong, it’s very satisfying. Librarian FAIL!

#1: Cliegg Lars. So your wife gets kidnapped by savages and you lose your legs trying to get her back. Now you’re alone and handicapped while having to take care of your son, his girlfriend, and your moisture farm. Then your stepson shows up out of nowhere, and in one night, he does what you and your friends couldn’t do for months. And he’s so mad at you for it, he takes your protocol droid away. Who’s gonna talk to the vaporators now?

So that’s my list of the top 7 losers for Attack of the Clones! Who else should be on the list? Have your say in the comments!