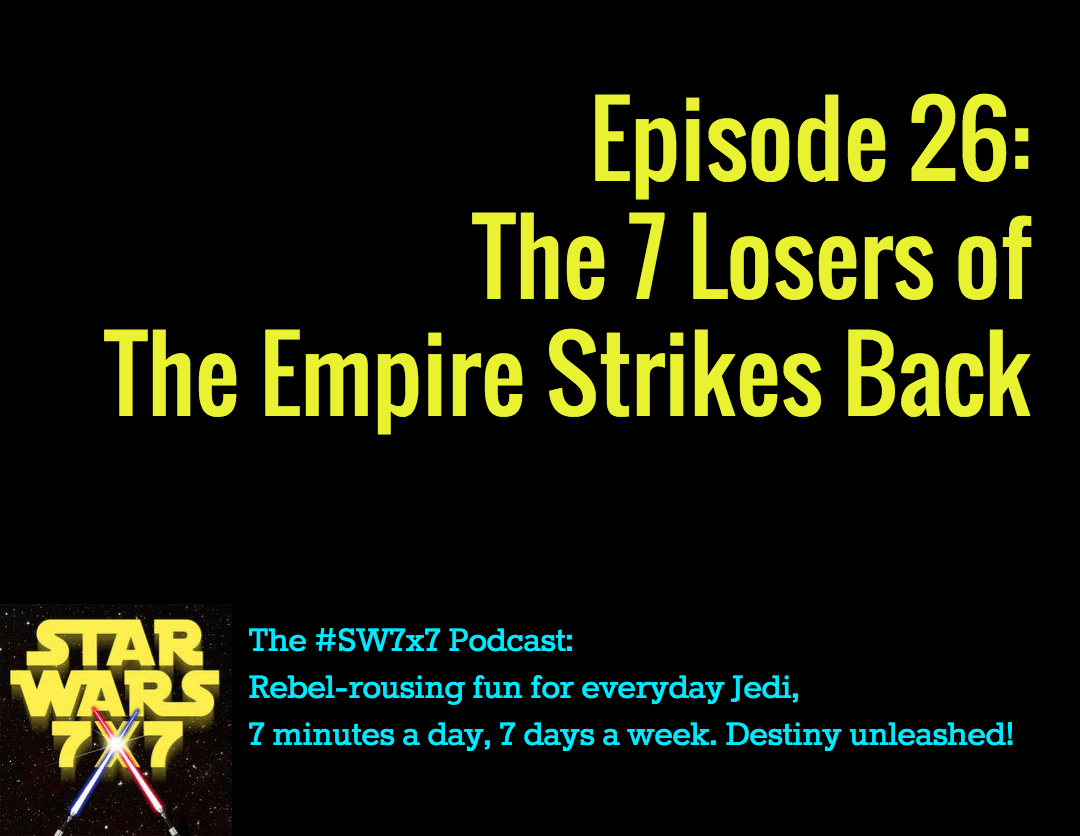 Hey, it’s Carel Struycken’s birthday! He played King Terak in that unforgettable movie, Ewoks: The Battle for Endor. And speaking of which, how come that movie isn’t considered canon anymore? It’s a movie, right? And Lucas had a hand in making it, right? Grrrr…

#LifeWouldBeBetterIf I could just stay at my post and not look for droids all day.

Today’s question: What beast had just bit the dust when Jabba said, “They will all suffer for this outrage”?

Force Feature: The 7 Losers of The Empire Strikes Back

Today, we’re talking about the losers in The Empire Strikes Back – the folks whose fates and fortunes took a turn for the worse as a result of the events of the movie. The one ground rule of this is that the winner had to either appear or be mentioned by name in the movie to qualify.

#7: Just one of the Ugnaughts. Look, they’d never show it on film, but I’m certain that when the Ugnaughts were playing keep away from Chewie with Threepio’s head, Chewie would have gotten sick and tired of that real quick and sucker-punched the nearest one to death like he did Pol Treidum. Game over.

#6: The Emperor. Not only does he not get Luke Skywalker like he told Vader to do, Vader offers Luke the chance to rule the galaxy as father and son. Meaning that he’s already thinking of overthrowing the Emperor himself. Those Sith are so darned treacherous. You can’t trust any of them!

#5: Admiral Ozzel. “The fleet has moved out of lightspeed and ah——-” A good Force-choking wiped the smile right out from under that 1970s holdover mustache. At least he’d been given some slack for not making the right call on the probe droid. Which is why…

#4: Captain Needa. He only blew it once. And Vader was like, “How many guys do I have to kill to get my point across? When I said I wanted that ship, I didn’t say A ship. I didn’t say SOME ship. I said THAT ship. THAT SHIP, you morons. You’re worse than all the brain-degrading clones inside that useless stormtrooper armor! Apology accepted, who’s next?”

#3: Every bounty hunter except Boba Fett. So, 4-LOM and Zuckuss guessed that Solo was heading for the Rebel rendezvous point. Wrong! Bossk got conned by a pair of amateur bounty hunters he’d teamed up with. They stuck him in a meat locker, freed a bunch of Wookie slaves, and then turned Bossk in for an Imperial bounty on illegal Wookie pelting. Ouch! Dengar arrived in Cloud City just in time to watch Fett take off with Solo. But IG-88B fared worst of all, getting fried by Fett and left in an Ugnaught junk pile.

#2: Dak. Ready to take on the whole Empire himself, he can’t get set, then there’s a fire control malfunction, and then a Walker’s laser blast hits the back of Luke’s snowspeeder and kills him. And to make matters worse, a Walker stomps the speeder flat with Dak’s body in it. Guess the Empire was even more ready to take him on.

#1: Luke Skywalker. It’s a ridiculously bad movie for him. Let’s see…Gets pounded by a Wampa. Gets shot down in battle. Crash lands in a swamp and gets schooled by a little green imp. Loses Leia to Han in the love triangle. Doesn’t only NOT rescue anyone, but also walks right into a trap. Loses his hand and his dad’s lightsaber to Vader. To add insult to injury, he has his entire worldview completely and utterly shattered. And when he tries to commit suicide in the face of all this, he fails at that, too.

So that’s my list of the top 7 losers for The Empire Strikes Back! Who else should be on the list? Have your say in the comments!