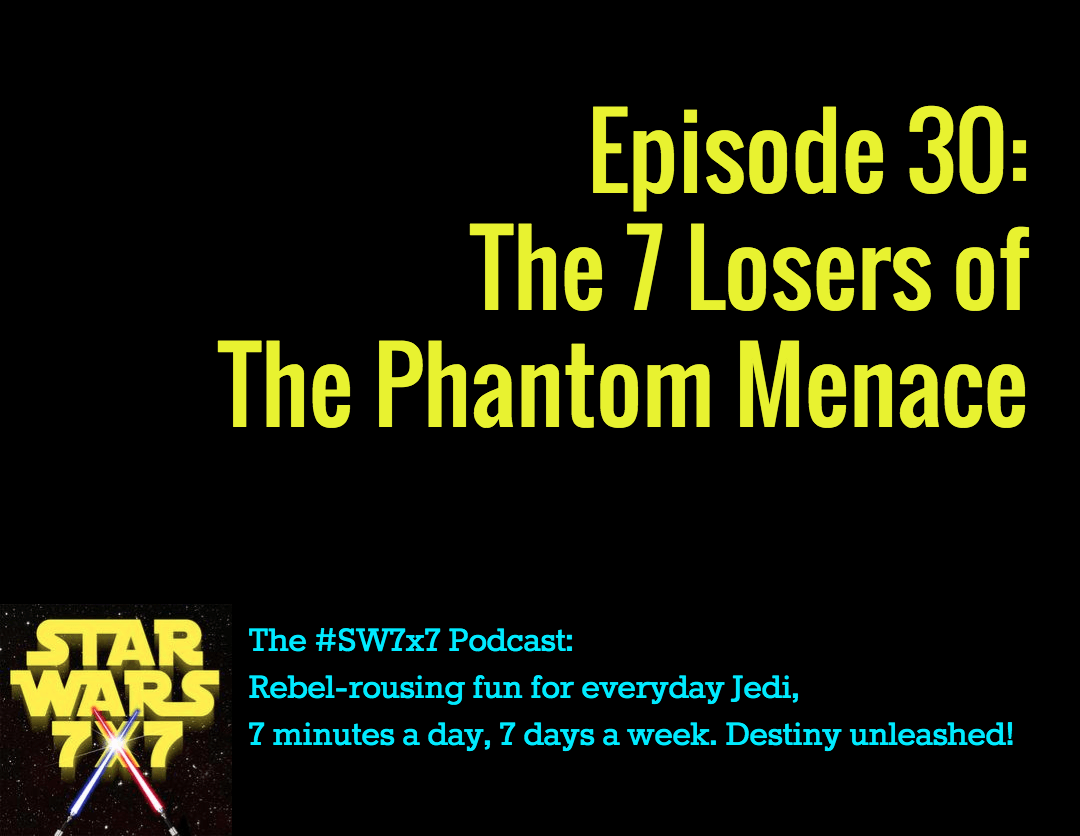 Happy birthday to Alex McCrindle! He was a bit part player in TV shows in Britain for decades. And the only thing you probably ever saw him in was Star Wars, as General Jan Dodonna.

Today’s question: What floating city operated a gas mine in the Bespin system?

Force Feature: The 7 Losers of The Phantom Menace

Today, we’re talking about the losers in The Phantom Menace – the folks whose fates and fortunes took a turn for the worse as a result of the events of the movie. The one ground rule of this is that the winner had to either appear or be mentioned by name in the movie to qualify.

#7: Watto. Loses “everything,” which doesn’t seem to include his junk shop business or Shmi Skywalker, or his health. Maybe he’ll have to sell them to pay for his losses? Either way, it turns out gambling was his weakness after all! That’s what you get for being a complete stereotype, I guess.

#6: Chancellor Valorum. Hmm, mired in baseless allegations of corruption? I wonder who managed to mire him in those allegations? He was knocked out more easily than a TIE fighter in an asteroid field. Bye bye, Valorum, don’t let the door hit you on the backside on the way out!

#5: Yoda. Overruled by the rest of the Jedi Council in allowing Anakin to be trained as a padawan. Losing his ability to sense that bad guys are nearby. Gets no further clues about the Sith Lord who’s been killed. And gets rendered in CGI instead of being a complete puppet performance. Age is finally catching up to ol’ Yodster.

#4: C-3PO. Created by the kid who’ll become the most evil person in the universe, and then abandoned naked and incomplete (but able to comprehend his fate) on a desert back world of a planet, serving an enslaved woman. No wonder he’s such a pessimist!

#3: Darth Maul. After all that Sith training, he blows his only two missions, and there won’t be any “third time’s the charm!” nonsense after Obi-Wan slices him in half. Sure, he killed a Jedi, but he didn’t get a lot of time to gloat over that.

#2: Everyone around Qui-Gon Jinn. He gets his diplomatic ship blown up with all crew on board; subjects everyone to his new life debt partner Jar Jar; steals a mother’s only kid away from her; subjects everyone around him to said kid, who shouldn’t even be allowed to enter the Jedi academy; fails to uncover the mystery of the Sith as ordered by Yoda and Mace Windu; and nearly gets his Padawan killed because he doesn’t wait to take on Darth Maul together. Which actually winds up being the cause of death for his own sorry butt. Nice job, “Qui-Goon.”

#1: Jar Jar Binks. Look, this one’s more personal than anything else. I’ve stepped barefoot in dog poop, had my kids pass gas directly on me, got my hand stuck in cars, had one of my kids grab my tongue and pull too hard on it, been kicked in the groin, and zapped my tongue on the terminals of a 9-volt battery. I wouldn’t wish any of those incidents on anyone, and Jar Jar goes through them all in the space of two days. If someone’s got a life debt to you, wouldn’t you want it to be Chewbacca instead? Yup, Jar Jar’s about the biggest loser there is.

So that’s my list of the top 7 losers for The Phantom Menace! Who else should be on the list? Have your say in the comments!