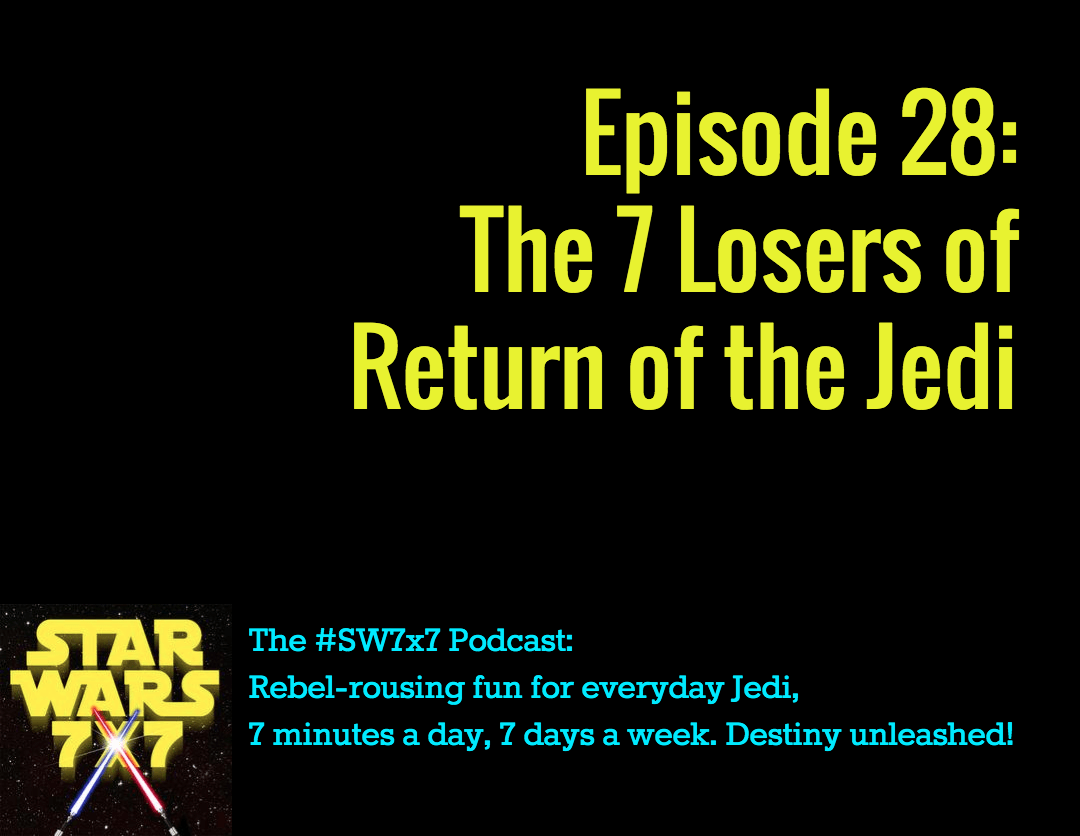 Here’s Adrian Dunbar, celebrating a birthday today, and who’s part of a weird set of circumstances. He was cast as Bail Organa for The Phantom Menace, but his scene was cut, and Jimmy Smits got the role for Attack of the Clones and Revenge of the Sith. But…his likeness was used for images of Bail Antilles in the Expanded Universe. Very strange!

Im honor of the Rebels clip unveils at Comic-Con, I am also unveiling a hilarious Rebel still. Have a good laugh 🙂 pic.twitter.com/egiDUsT7vD

Today’s question: What weapon carried firepower greater than half the starfleet?

Force Feature: The 7 Losers of Return of the Jedi

Today, we’re talking about the losers in Return of the Jedi – the folks whose fates and fortunes took a turn for the worse as a result of the events of the movie. The one ground rule of this is that the winner had to either appear or be mentioned by name in the movie to qualify.

#7: Ewoks. It was bad enough that the Empire had to show up on Endor and use it as a base for building the new Death Star. Then the Rebels had to show up and blow up the Empire. They were supposed to be in this little tucked away corner of the galaxy, and now, they’re in the center of a galactic battle they never asked for. They’re the real victims in all of this.

#6: Moff Tiann Jerjerrod. Assigned to oversee construction of the second Death Star, he did in fact get the crews to double their efforts, so they were fully armed and operational when the Rebel forces arrived. And then the Rebels found an even bigger hole in the design, and blew it up, along with his secret motivational tactics.

#5: Bothan spies. They died thinking they were helping the Rebellion, when in fact they died while unwittingly helping to set a trap that could have wiped out the fleet and destroyed the entire uprising. Thanks for nothing, Bothans.

#4: Boba Fett. Given the chance to shine, he fails miserably. Oh sure, he looks cool flying over to the skiff with his jet pack. But when he lands, his blaster is immediately cut in half. He tries to tie up Luke, but Luke cuts the rope. Then he gets knocked silly by a laser blast from the Sail Barge, which must explain why he couldn’t shoot the broad side of a barn, let alone Luke a few feet away on another skiff. And then a slapstick bit knocks him into the Sarlacc Pit. How people didn’t lose respect for him after that miserable performance, I have no idea. (You know he survived, right? That’s the rule – unless you see the body, they may not be dead.)

#3: Jabba the Hutt. Lord knows he was warned repeatedly that there’d be trouble if he didn’t play along. He has no one to blame but himself for everything that happened. I mean, what do you do with a guy who just can’t take the hint?

#2: The Emperor. He thinks he’s going to get Luke to replace Vader as his new apprentice. Silly Sith lord, Luke’ll never join you! So even though he shouldn’t be surprised in the slightest, he pitches a hissy and tries to fry Luke with lightning. Clearly he went to the Dr. Evil school of dealing with your enemies. I get the feeling it’s been a while since he’s had to kill anyone, so he must have wanted to savor it. But hell hath no fury like a Sith scorned, and Vader drops him like he’s hot.

#1: Admiral Gial Ackbar. The greatest naval commander of his time, who took on a fully operational and shielded Death Star, AND a fleet of Star Destroyers, and won. And his place in history has been reduced to a catchphrase. Alas, poor Ackbar, that was the real trap.

So that’s my list of the top 7 losers for Return of the Jedi! Who else should be on the list? Have your say in the comments!