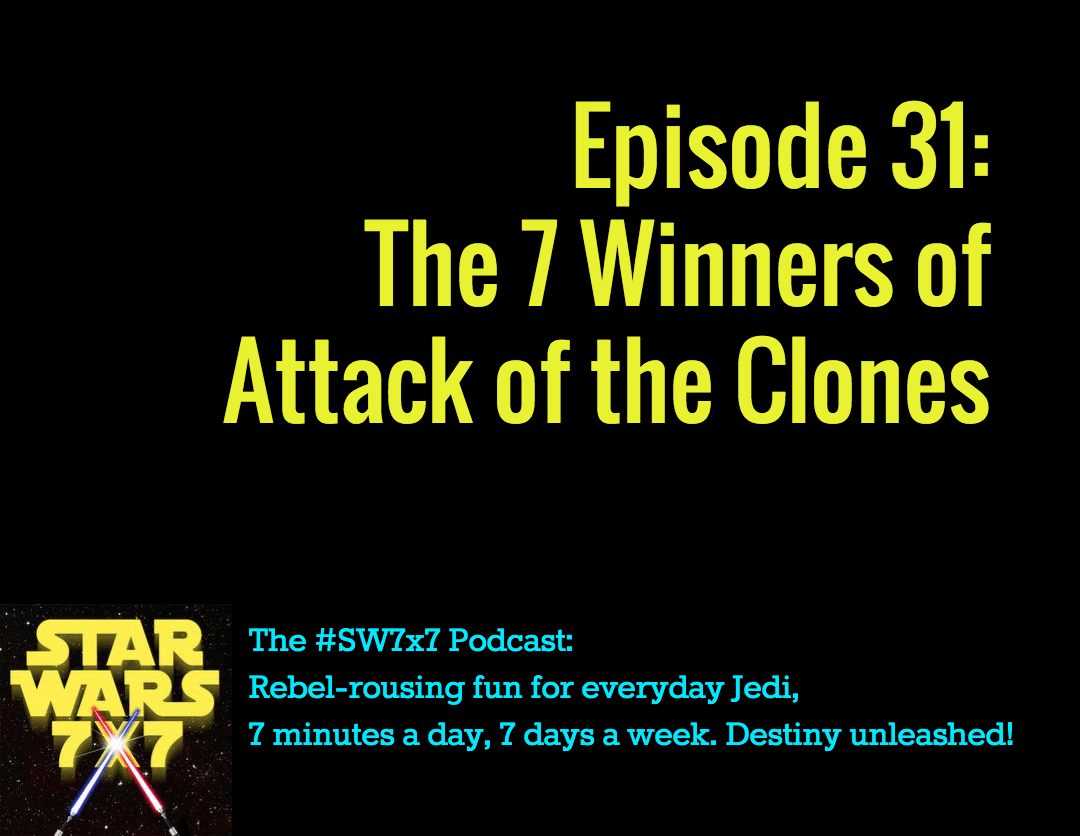 “Good shot, Janson!” No one looks happier in his job than Wes Janson, who was Wedge Antilles’ snowspeeder gunner in the Battle of Hoth. Janson was played by Ian Liston, and he’s still smiling. Happy birthday, Ian!

Behind the Scenes: Filming at @RanchoObiWan with @SteveSansweet. Deciding what to shoot first was tough! pic.twitter.com/xzZLyTEYNp

Today’s question: Who’s described as a “vile gangster,” and where is he called that?

Force Feature: The 7 Winners of Attack of the Clones

Today, we’re talking about the winners in Attack of the Clones – the folks who came out on top, in a better position because of the events of the movie, or who were just plain luckier than they had any right to be. The one ground rule of this is that the winner had to either appear or be mentioned by name in the movie to qualify.

#7: Jango Fett. OctoMom and John and Kate Gosselin and all those other reality show nutballs with dozens of kids are just pretenders to the throne. Jango has 200,001 kids, with a million more in “production.” And he’s got a bunch of Kaminoan nannies to raise all but one of them to adulthood. Plus he’s gettin’ paid!

#6: Jar Jar Binks. How the heck did he become a delegate to the Galactic Senate in the first place? What possible qualifications could he have earned in the few years between Phantom Menace and Attack of the Clones? Considering that senators in our own world also tend to be wealthy, you could also assume that Jar Jar’s gone from rags to riches. Is there no justice in that galaxy?!

#5: Supreme Chancellor Palpatine. Good grief, he thought it was easy conning Padme into the no-confidence vote in Phantom Menace that got him the Chancellorship. Getting Binks to give him emergency powers was easier than taking candy from Stinky the Hutt baby.

#4: Anakin Skywalker. The girl he’s been obsessing over for the last five years suddenly comes back into his life. Yippee! He tries to work the mojo on her, but she won’t come across, until he commits mass murder. Most women would be high-tailing it outta there, but Padme’s like, “They killed your mom, so you killed all the Sand People? And the women? And the children? That’s kinda hot.”

#3: R2-D2. This is the first time we see R2 taking charge and going off on his own (chronologically speaking), which is exactly the kind of non-programmed behavior we’ve come to love about him. Good thing, since he was there to keep Padme from getting killed by molten ore. And he saves C-3PO’s bacon, too, so Threepio can be the maid of honor for the secret wedding. R2 is clearly the best man in this pair.

#2: Count Dooku. He’s been doing the grunt work for this whole secret plot to manufacture a war within the Republic, and he finally gets to light the fuse. Plus, he takes on three Jedi and lives to tell the tale. That’s gotta be a satisfying day.

#1: Mace Windu. Every single Jedi in the Star Wars movies looks like he, she, or it wants to live in peace and harmony, and they definitely only use the Force for knowledge and defense, never for attack. Except for Mace Windu. If anyone’s testing the limits of what a Jedi can do without going to the Dark Side, it’s this guy. He looks like one sassy remark from the Jedi Librarian would be enough to set him off. He must have been so psyched to go to Geonosis when the call came. “YEAH! Time to drop some knowledge on these evil sons-of-Sith!”

So that’s my list of the top 7 winners for Attack of the Clones! Who else should be on the list? Have your say in the comments!