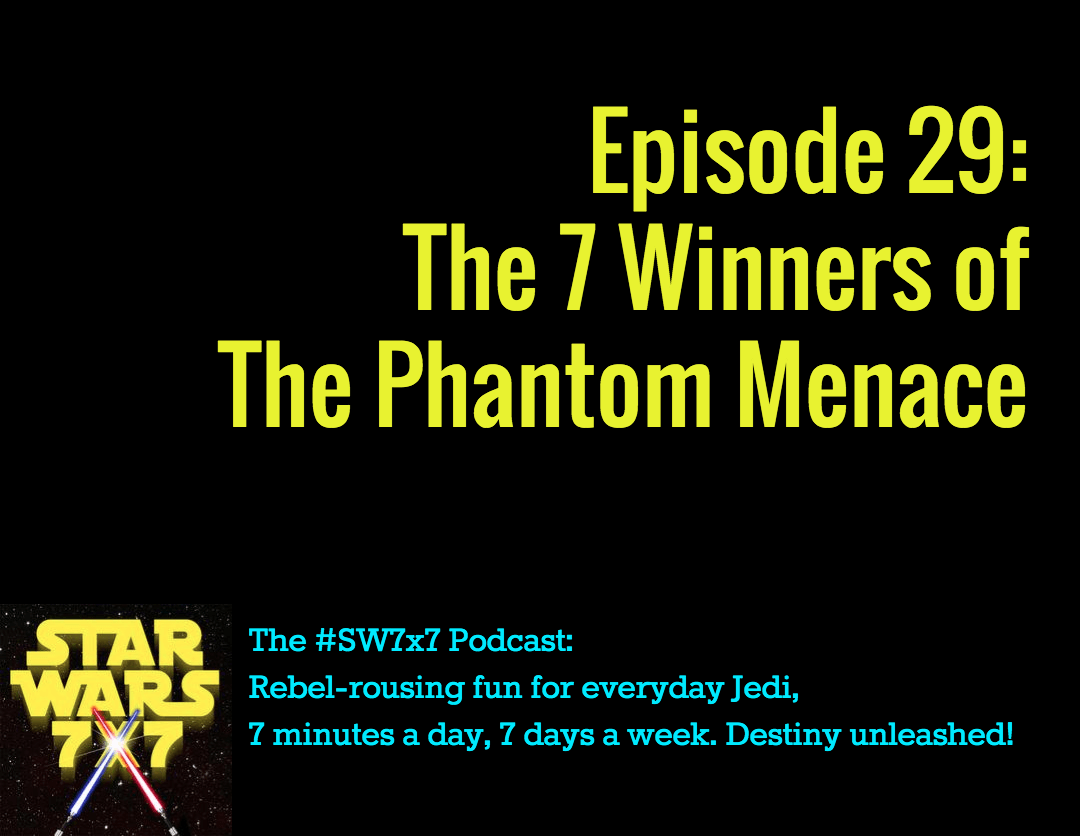 Let’s celebrate our childhood today with James Howe! He’s the author of more than 80 kids books, including a couple you might remember from your youthful reading days: How the Ewoks Saved the Trees: An Old Ewok Legend. Do you remember reading kids’ books like these back in the day? Share your memories in the comments!

From The Windu Book Of Wisdom: When you get angry, always count to ten. When you get to seven, punch a throat. They’ll never expect it.

Today’s question: Who was Jabba the Hutt’s chief aide?

Force Feature: The 7 Winners of The Phantom Menace

Today, we’re talking about the winners in The Phantom Menace – the folks who came out on top, in a better position because of the events of the movie, or who were just plain luckier than they had any right to be. The one ground rule of this is that the winner had to either appear or be mentioned by name in the movie to qualify.

#7: Jabba the Hutt. He got a great nap in during the podrace, had some snacks, flicked little creatures off a high ledge to their death, and people waved and cheered for him. Ahhh, the life of a celebrity. And he probably cleaned up in the podrace betting, too.

#6: Jar Jar Binks. As Obi-Wan describes him, a “pathetic life form” who only survives in this movie by the grace of Qui-Gon Jinn, and a director who relies on slapstick for comic relief. The mere fact that he survives despite the odds stacked against him is enough to get him on this list. Look, I get that you have to play to the kids a bit, but even after 15 years, he still seems utterly useless.

#5: Anakin Skywalker. The immaculately conceived slave boy wins his first podrace ever, meets an angel, gets emancipated and helps bankrupt his slave owner, singlehandedly defeats the Trade Federation army by accident, and becomes a Jedi padawan. That’s so wizard! And he seemed to handle leaving his mother back in slavery pretty well, all things considered.

#4: Boss Nass. Once a stubborn isolationist, Nass starts making friends with his Naboo neighbors and helps keep the droid army occupied long enough for Anakin to make his trick missile shot and for Padme to capture Nute Gunray. And as a gesture of thanks, he gets a plasma globe from the intergalactic mall chain store Spencer Gifts!

#3: Obi-Wan Kenobi. Who knew Obi-Wan was such a handy guy? He hotwires the power on the sub and saves everyone’s bacon flying through the planet core of Naboo, then repairs a hyperdrive (something only R2-D2 was able to do in previous movies). He’s pretty handy with a lightsaber, too, avenging his fallen master and wiping out dozens of battle droids. He even stands up to Yoda in an argument! Not many folks can get away with that…

#2: R2-D2. Upgraded from being cannon-fodder rolling around on the outside of a starship in space to being the queen’s personal astromech droid. And within seconds of meeting Threepio, he manages to mock and embarrass his eventual counterpart. There’s the R2 we all know and love! The movie wouldn’t be the same without you.

#1: Sentator, then Chancellor Palpatine. So easily manipulates himself into the Chancellor’s position, it should be a crime. Oh wait, it kinda was! And he avoids the whole Sith master/apprentice killing thing thanks to Obi-Wan taking out Darth Maul. You get the feeling he’s been planning this for a while, don’t you?

So that’s my list of the top 7 winners for The Phantom Menace! Who else should be on the list? Have your say in the comments!