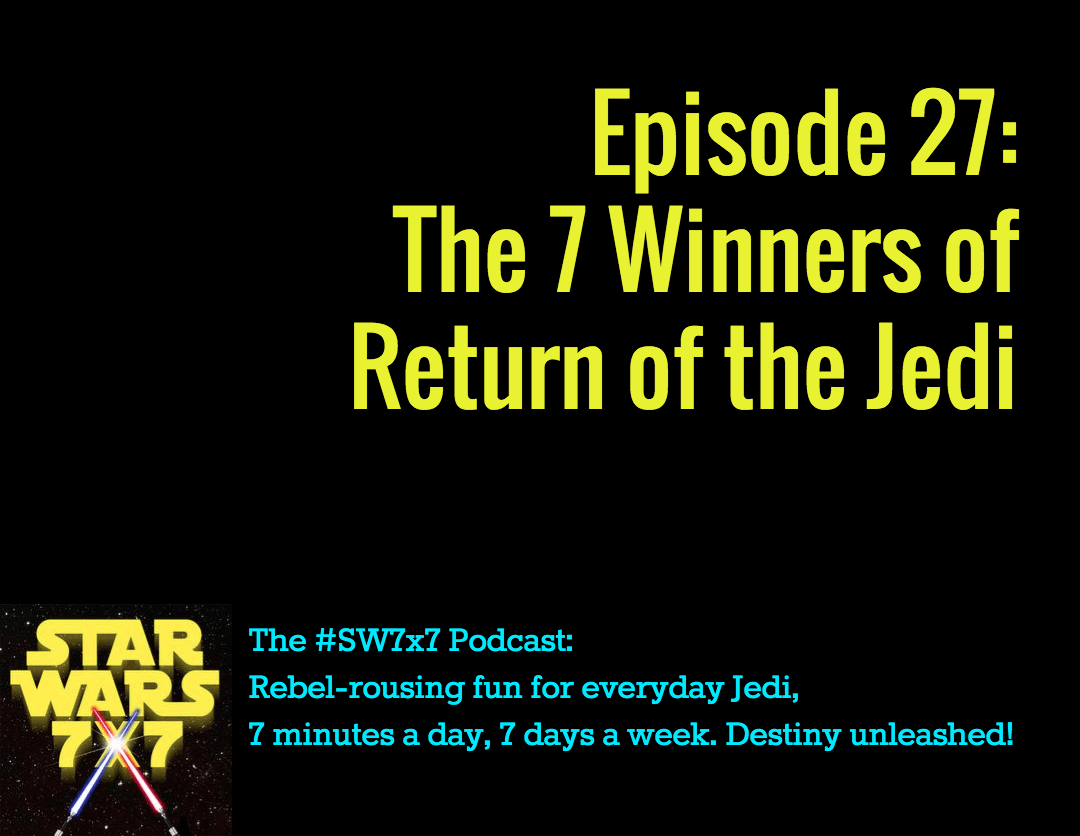 Yes, every last thing in Star Wars is named now, and here’s proof. Today is the birthday of Ian Roberts, who played an assistant bartender named Ganwick Trag in Attack of the Clones. And why, exactly, was it important to name the assistant bartender of the club where Obi-Wan and Anakin track down Zam Wessel? I can’t see it, but if you have thoughts on the matter, share them in the comments!

Ulf isn’t your average Wampa: he floss’s, works out & moisturises. On his way to work, a chance encounter with a Jedi changes everything…

Force Feature: The 7 Winners of Return of the Jedi

Today, we’re talking about the winners in Return of the Jedi – the folks who came out on top, in a better position because of the events of the movie, or who were just plain luckier than they had any right to be. The one ground rule of this is that the winner had to either appear or be mentioned by name in the movie to qualify.

#7: Wedge Antilles. He’s outta the doghouse now! After bailing on the Death Star battle, and getting demoted from Red 2 to Rogue 3 on Hoth, he gets to take over command of the X-wings as Red Leader. And this time, he makes good on the opportunity.

#6: Princess Leia. She gets her honey back, and gets to throw the “I know” line back in his face. She finds out she has a twin brother, teddy bears play with her hair, and she completes her secret Endor mission that helps destroy the new Death Star. And all Jabba does to her is put her in a metal bikini, stick his tongue out at her, and put her on the chain that she eventually uses to strangle him with. Not bad at all.

#5: Darth Vader. He gets the Death Star back on schedule for his boss, and delivers Luke as promised. Employee of the month! Then despite getting his own mechanical hand cut off by his son, he decides to call it even and pitches his boss down an endless pit. Employee of the decade! Too bad he won’t get to use the hangar bay closest to the Throne Room, but what the heck, he’s reconciled with his son and gets to be a Force ghost instead of a Sith…what do dead Sith become, anyway?

#4: Lando Calrissian. “Someone must have told them about my little maneuver at the Battle of Taanab.” Really, Lando? No one had even heard of Tanaab until you came along. But hey, you played it so well, you got a general’s commission out of it. Besides, now that Han’s been rescued, Lando can’t wear Han’s clothes anymore, so he needed some new duds.

#3: Ewoks. Treated as pests by the Imperial forces, the Ewoks turn out to be savage killing machines that also test super-high with the 5-7 year old demographic and make an equally savage killing in toy stores.

#2: Arvel Crynyd. You know him as Green Leader, the guy who slammed his A-wing into the bridge of the Super Star Destroyer Executor, causing said capital ship to slam into the Death Star. Even though his fighter had been shot and was spinning out of control, he did enough to drive it into exactly the right place at exactly the right time. Man, if today’s your day to die, that’s about the best result you could ask for.

#1: C-3PO. In Star Wars, he had three rough space rides he hated, lost an arm and had his joints frozen. In Empire, he was insulted repeatedly, switched off unceremoniously, and blasted to pieces, only to be mocked by R2-D2 afterward. In Return of the Jedi, he gets a dream job as Jabba’s translator, the Ewoks revere him as a god, and is secretly a little too happy that R2 is the one who got shot this time around. Finally, Goldenrod catches a break!

So that’s my list of the top 7 winners for Return of the Jedi! Who else should be on the list? Have your say in the comments!