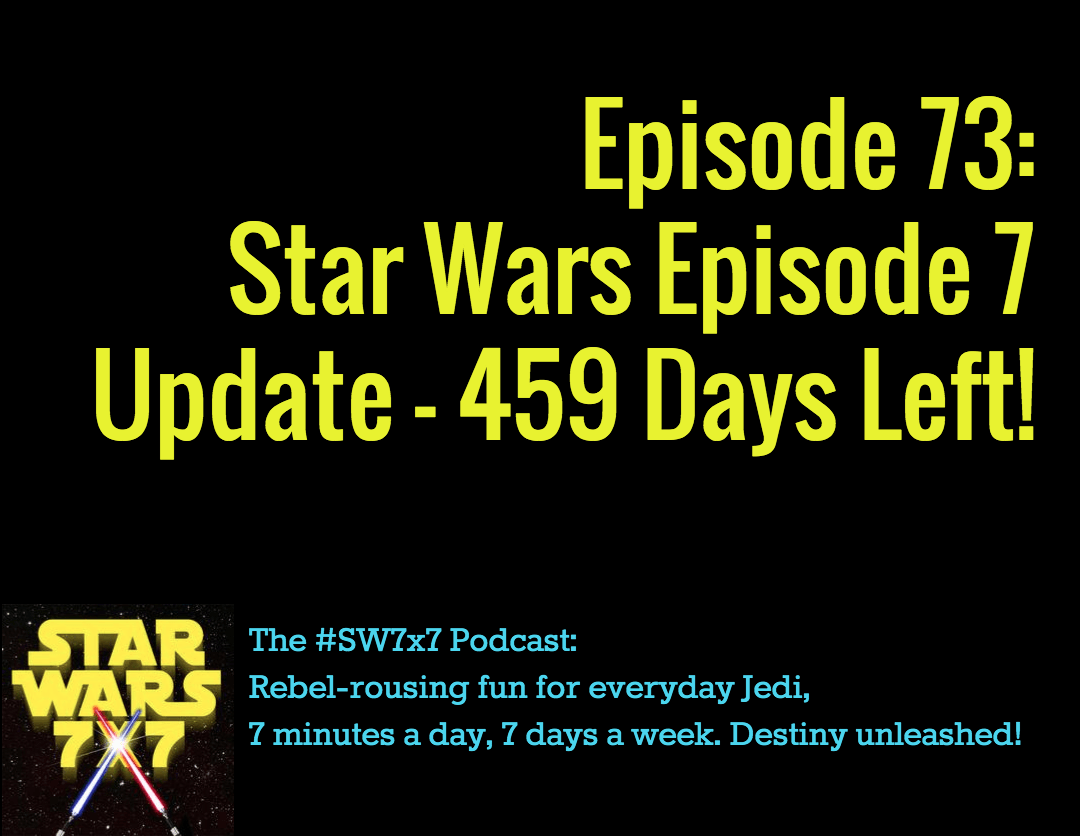 Now that Harrison Ford is back on set and filming has re-started, it’s only natural that the rumor mill has been fired up again. And two of the biggest sensations of the last week have come via Twitter, so if you dig staying on top of everything, follow our breaking news Twitter feed at @SW7x7podcast.

First off is the fact that some guy was able to fly over the grounds of Pinewood Studios and get photos of a partially built Millennium Falcon and what’s being referred to as a black X-wing. I have a feeling that’s the last plane that makes it over the wall. Next week I fully expect to be reporting on the surface-to-air missile batteries that have been installed at Pinewood.

Is this really remarkable? We’ve all known about the Falcon since J.J. Abrams tweeted a photo of the chess table months ago. But let’s face it – Abrams and company have every reason to play with our heads on this, so as far as I’m concerned, this is the official confirmation…of a YT 1300 freighter being in the film. Sure, I think it’s likely it’s the Falcon.

As for the black X-wing, it’s got tarps on it, or so it seems, so who’s to say exactly what the deal is with it? It could be the same X-wing we saw in the Force for Change video previously. There’s also a rumor going around about which cast member the X-wing belongs to, and all I’ll say is, it’s not Luke, according to the rumor.

Second is the tweet from J.J. Abrams about him desperately wanting a new Apple Watch. It’s a photo of one of his hand-written cards, and behind the card, the background features a lighting scheme that looks very much like Death Star light panels. Leading the Internet to melt down and wonder if a) this was an accidental leak, and b) if there’s a new Death Star in the film.

So your answers are, a) there’s nothing accidental about Abrams, so this was definitely a calculated thing. And b), I can’t imagine them going back to the well with a third Death Star, but they do have a habit in Star Wars of creating super-sized destructive weapons. Either way, it’s a hint that some semblance of the Empire may still be in existence. Or that there will be flashbacks to the time period of the original movies. In other words, it doesn’t tell us much of anything, so the Internet got all hot and bothered over it for nothing. And speaking of the Internet getting all hot and bothered, one of the big leaks being talked about this week is about sketches purporting to be Daisy Ridley’s costume. It’s been likened to a certain original trilogy character’s outfit, but I’ve looked at the sketches, and I’m not seeing the parallels. It looks more like Princess Leia’s Endor forest camo than the other person being bandied about. On a semi-related note, there have been a number of stories this week trying to link up which actor will be portraying which role.

They vary in degree of specificity – for example, one report has Lupita N’yongo playing the daughter of an original trilogy hero, and another report has her playing a certain type of villain (and unrelated to the heroes). Another claims to knowledgably spell out the parts being played by John Boyega, Adam Driver, and Daisy Ridley, alphabetically speaking, along with a few plot details.

And this one seems to match while also naming a role for Oscar Isaac, too. As for plot details, and we’ve covered this once before, but here’s the laundry list of plot points that have been circulating around the Internet, with the warming that this was posted by someone at 4chan, so the odds of being able to trust it are about 3,720 to 1.

One of those rumors involves the post-Return of the Jedi fate of the Jedi Knights, which would be pretty interesting if it were true. And on the heels of something reported weeks ago, we’re now getting the word that Star Wars Rebels and Star Wars Episode VII are definitely being linked as part of the larger Star Wars cinematic universe. So things you see in Rebels when it comes out next month might give you hints about things to come in Episode VII.

And that’s it for the roundup this week! What do you think, what are you excited about? Let us know at Facebook.com/sw7x7!

Surprising and little known Star Wars tidbits, usually related to today’s Force Feature.
Did you know? On this day in 1922, a guy named Bob Anderson was born. You’ve heard of David Prowse and James Earl Jones and Sebastian Shaw – Bob’s the one a lot of people haven’t, but he’s yet another guy who played Darth Vader. Specifically, he staged and performed the lightsaber duels in Empire and Jedi.

Today’s question: Who fired the tow cable that brought down the first Imperial walker?

Previous Post: 72: Lando Calrissian, Stickin’ It to the Man
Next Post: 74: Star Wars VII Spoilers: Why Are We Obsessed With Them?