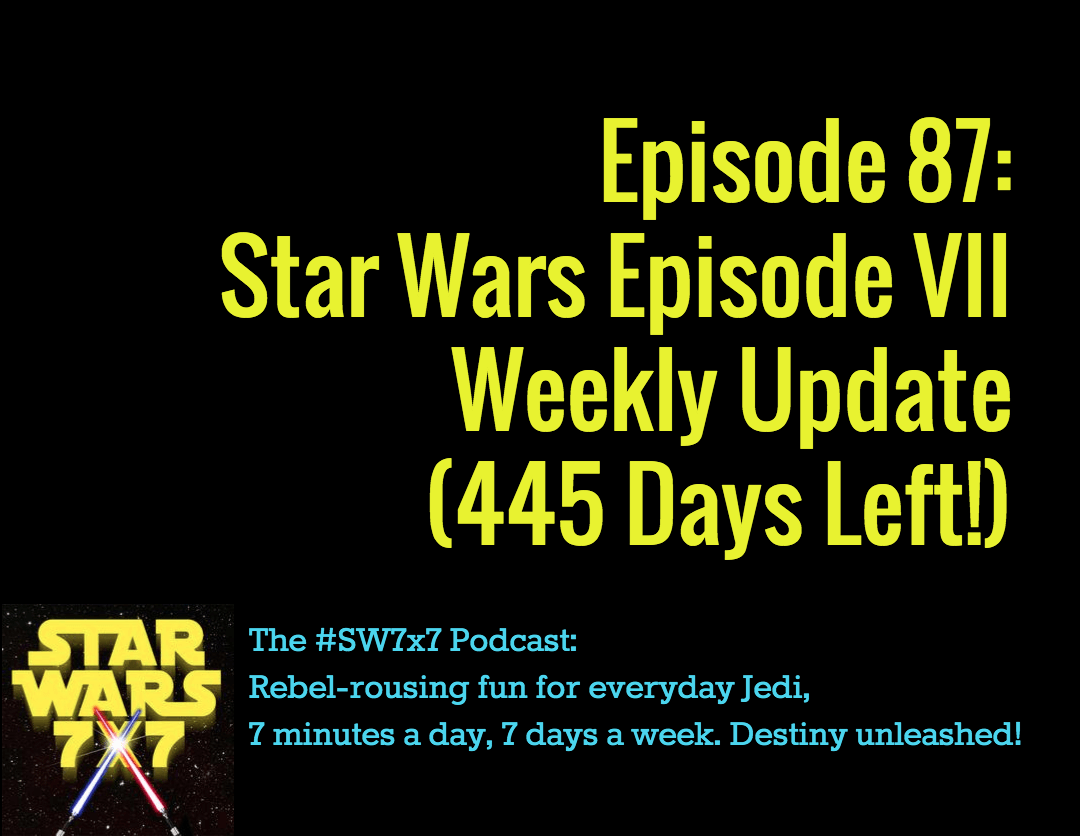 Welcome to your weekly update on Star Wars: Episode VII. We’ve only got 445 days to go! Sounds like a lot, but it’ll be gone in the blink of an eye. The fact of the matter is, these days are always the hardest. Once we get under a year, it’ll get easier, and then once we get under six months, it’ll be even easier.

Why, you ask? Well, look at what we’re dealing with now, which is near radio silence from all the official sources. So we have outlets like the ones we discussed on an episode earlier this week scraping and scrapping for sources and tidbits, rumors and leaks, and they’re all lucky of they can catch a break.

The big moment, though, will be when we get the first trailer, and after that, the floodgates of information will start to open. We’ll see which of the actors are playing what kinds of characters, we’ll get a sense of the locations, and may even get a taste of the story, depending on how detailed a teaser it is. Of course, they could mess with us and only show the Original Trilogy characters in the trailer, and keep us in the dark even longer, but somehow I just don’t see that happening.

That said, just the thought of seeing Luke, Leia, and Han onscreen again for a trailer is giving me goosebumps as I read this.

Okay, on to the events of the week, which we usually try to keep minimal in terms of the details here on the podcast, and provide links on the website at SW7x7.com, but we’re going to do things a little differently today, and actually talk about some of the stuff that’s been in the news here on the podcast. So if you want to jump ahead to 6:30 in the podcast to get your dose of trivia and avoid the rumors and news, now’s the time to do it.

The big items for this week are the first detailed look at the rumored Chrome Trooper, as they’re calling it, broken by Indie Revolver, and a piece of concept art there, too. Starting out with the Chrome Trooper, there are two pictures showing the helmet view only, of the trooper that may also be able to cloak itself, if some rumors are true. As for the concept art, it’s the Millennium Falcon hovering over a forest while two characters are dueling on the ground with lightsabers, with a third blaster-wielding person in the foreground. And all of this is linked from the blog post at SW7x7.com

Meanwhile, Oscar Isaacs was interviewed by Entertainment Weekly about his role in an upcoming movie, The Two Faces of January, and as you would expect, they couldn’t resist asking him about Episode VII. He dropped one nugget which put the Internet in a tizzy for a while, and I quote him talking at first about J.J. Abrams:

He’s shooting on film and actually building the sets, so you’ve got hundreds of Stormtroopers or whatever, and hundreds of extras and all the ships. You actually see it. It’s all real. Everyone can interact with the world.

Hundreds of Stormtroopers? Could that be possible? The BBC also interviewed Roger Moore about his visit to the set to Episode VII, and here’s the relevant bit for us to consider:

BBC: So, what were they filming that day? Can you tell me?

Moore: Well, yes! They were filming something with a lot of mountains and snow.

Is it just me, or do you take these things with a grain of salt? If we know there’s a disinformation campaign happening around the movie, would these two actors be deployed to help spread false rumors? I could see Roger Moore slipping, but not Oscar Isaac.

And this last bit isn’t really “spoiler news,” per se, but sharp-eyed observers noticed that the Millennium Falcon mockup in Greenham Common includes a new, rectangular radar dish, which replaces the one Lando scraped off inside the second Death Star in Return of the Jedi. Don’t little details like that make you feel like our sequel trilogy is in very capable hands?

Did you know? Anthony Daniels also announced that his part in the filming of Episode VII is complete, and any time you hear something like that, you know you’re one step closer to seeing the real thing for yourself. Hang on back there, Star Wars fans!

Yesterday’s answer: In a landing bay on the second Death Star

Today’s question: What was the second thing Han Solo asked C-3PO for after the Ewoks made them members of the tribe?