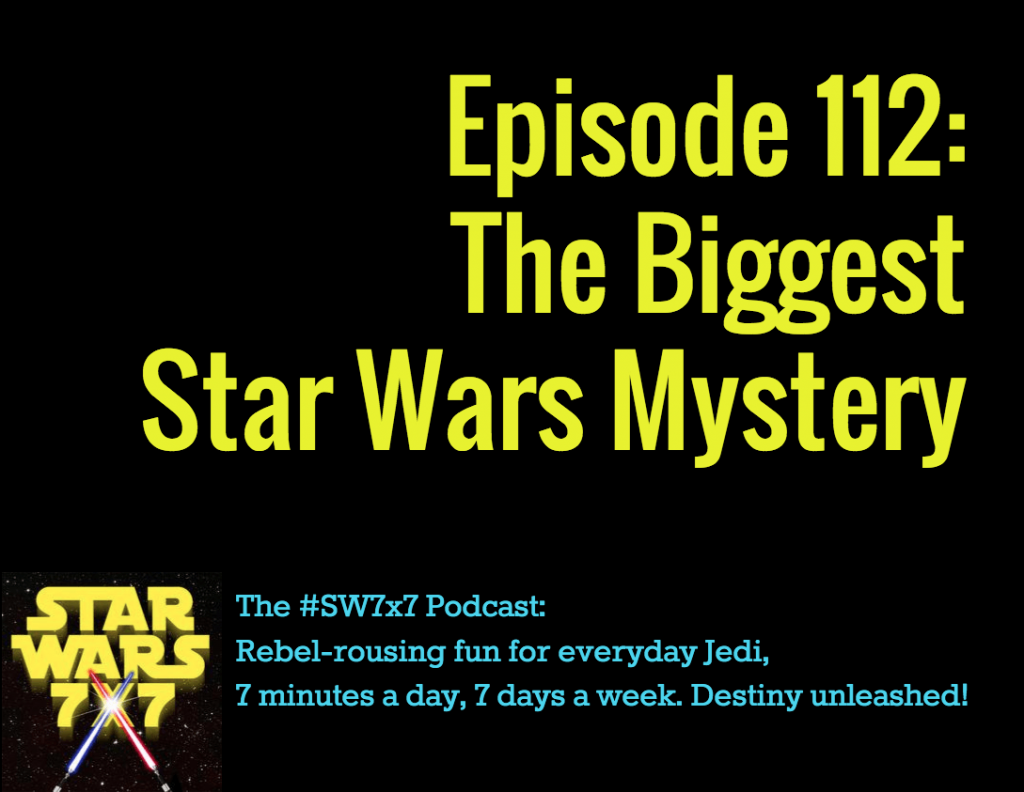 Let’s wrap up Mystery Week by exploring the biggest mystery of all in the Star Wars universe right now. And that mystery only starts with Episode VII.

Because here’s the scoop. Lucas had a nine-movie arc planned from the beginning, as you probably already know. And when he sold Lucasfilm to Disney, what went along with it was a treatment for Star Wars Episodes VII through IX, which he’d been working on for close to a year with Michael Arndt and Larry Kasdan. There’s a terrific article from March of 2013 in Bloomberg Businessweek, a full-blown, behind-the-scenes story of the sale, from Lucas’ first conversation with Disney Chair Bob Iger in May 2011 to the closing of the deal in October 2012, which includes that bit of backstory.

So the fact of the matter is, it’s not just about Episode VII, even though that’s what we’re all getting obsessed with. It’s the trilogy itself. It already exists. Let me repeat that: The trilogy exists. The whole story exists already. It just needs fleshed out scripts for VII and IX, but still – there are a couple dozen people in this world who know the whole story.

That’s part of the biggest mystery of all right now – the fact that the whole sequel trilogy has been mapped out, and there’s no way, no how anyone’s got an inside spoiler source who can let us in on those secrets.

Here’s the other part: What comes after the Hero’s Journey? If you have a fall, and a redemption, what’s the third act? Lucas was heavily into Joseph Campbell and the modern retelling of classic myths via Star Wars, but the biggest mystery is, once you’ve completed the cycle, what comes next? Do you just do it all over again? Somehow, that doesn’t seem to have the finality that I think we’d all look for in a sequel trilogy – not to just go on the merry-go-round again.

I’m going to be digging into this on my own time, revisiting the Power of Myth to see if there might be any clues. Because if you try to search things like, “What comes after the Hero’s Journey?” or “Fall + Redemption + …” you get absolutely no results.

Meanwhile, if you want to, you can check out the Wikipedia entry on the Star Wars sequel trilogy, which collects quotes from Lucas across the decades that give potential hints at what the films could include. There’s nothing there that you’d call a spoiler, just some interesting conjecture. The ones that I found most interesting were these tidbits:

The trilogy would deal with the rebuilding of the Republic (Lucas in 1980).

Luke would have a romantic relationship with a female love interest (Lucas in 1988).

The main theme of the trilogy would be moral and philosophical problems, such as the necessity for moral choices and the wisdom needed to distinguish right from wrong, justice, confrontation, and passing on what you have learned (Lucas in 1983 and 1989).

And lastly, this, from Timothy Zahn, who had talked with Lucas about Lucas’ sequel plans while Zahn was developing those very first Expanded Universe novels:

The original idea as I understood it—and Lucas changes his mind off and on, so it may not be what he’s thinking right now—but it was going to be three generations. You’d have the original trilogy, then go back to Luke’s father and find out what happened to him, and if there was another seventh, eighth, or ninth film, it would be Luke’s children.

So let’s start there. Jedi aren’t supposed to be parents, as far as Episodes I-VI tell us. Yet there’s compelling evidence that Luke could have children in Episodes VII-IX, and he did have a kid in the Expanded Universe, too.

Lucas has said it’s Darth Vader’s story, which it is for I-VI, the story of him turning evil and his son bringing him back to the light.

Now, there are rumors that some of the young cast members – the next generation – try to handle something and get over their heads, and have to call on our experienced heroes to help. But what if it was the other way around? What if Luke, in trying to rebuild the Republic and the Jedi Order, doesn’t finish the job of eradicating Darth Vader’s influence from the galaxy, and his children have to come to his aid and protect his legacy, while coming to grips with the evil in the family?

That, to me, seems like a strong direction a mythological story could take. 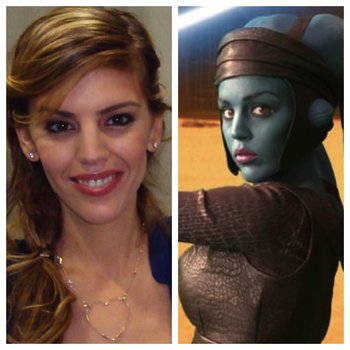 Happy birthday to the lovely and talented Amy Allen, who played the Twi’lek Jedi Master Aayla Secura in Attack of the Clones and Revenge of the Sith. She survived the First Battle of Geonosis, only to be gunned down by her clone trooper squad on Felucia. Aayla, we hardly knew ya! Thankfully, we had the Clone Wars cartoon to get to know you better.

Today’s question: What life-size Star Wars vehicle was featured in the 1996 Neiman Marcus Christmas Book as their charitable auction item?