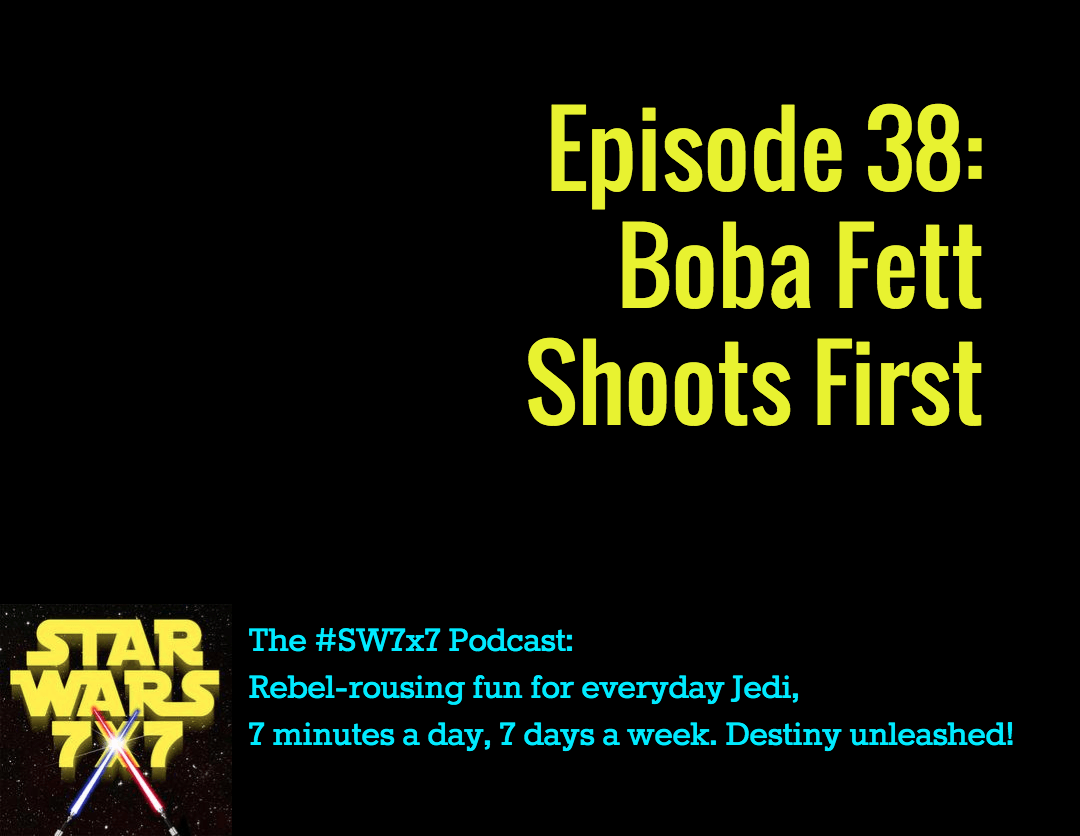 Boba Fett is the only being known to have survived the belly of the almighty Sarlacc. Wookiepedia claims his iron will and Mandalorian armor are what helped him to fight his way out, but I swear in the Marvel comics I read as a kid after Return of the Jedi came out, it looked like the Sarlacc either burped or vomited him back out.

Today’s question: What suggestion of Darth Vader’s prompted Luke to attack Vader in a murderous rage?

Okay, here’s where I have to confess. From time to time on the podcast, I’ve gone on about how there’s a lot more Imperial stuff being made that shows up in the Star Wars Swag Bag, and that I want to see more Rebel stuff. And I’m lumping Boba Fett in with the Empire on this one, even though you can make a clear distinction between bounty hunters and the Imperials.

But doggone it, the uniforms are just too cool. I can’t help it! Sitting on my desk, looking me in the eye right now, is my vintage Boba Fett action figure. Specifically, Amputee Boba Fett, since he lost most of his legs in a run-in with my dog when I was, oh gosh, I must have been 11 or 12. Thank goodness my mom had the sense to make sure we ordered two of them via the mail-in offer.

I vaguely remember the Star Wars Holiday Special, and Boba Fett’s screen debut in it. I’m sure that, and the rest of the Star Wars toys I was getting, fueled the fire for getting him. Back in 1979, knowing that there was a new movie coming out next year, I knew Boba Fett had to be in it. And he had a flippin’ flamethrower! Or at least, that’s what it seemed like from the image on the packaging.

Well, that flamethrower didn’t show up in Empire, but Vader had to personally stress to him, “No disintegration!” With a little jab, jab, finger-pointing, so you know Fett was thinking about it.

Ultimately, he doesn’t say more than 30 words in Empire, but really, has anyone done so much with so little dialogue, so effectively? “He’s no good to me dead.” “What if he doesn’t survive? He’s worth a lot to me.” “Put Captain Solo in the cargo hold.” Perfectly menacing, and he looked the part, too, right down to the spur sound. Is it just me, or do I hear cowboy boot spurs jangle-jingle-jangling when he’s walking through the halls of Bespin on the way to Slave I with Han?

The thing that impressed me most about him, though, was the way he shot at Luke on Bespin. He knows Vader wants to capture Luke, and wants him alive, so why would he ever lay in wait to shoot Luke?

The answer? Of course he wasn’t going to shoot Luke! Those shots were perfectly aimed to slam into the wall next to where Luke was, not to hit him as he came around the corner. And not only did Boba shoot first, he was the only one who shot.

And even though he was the one walking out the door with Han’s frozen body, I never blamed him for it. I always blamed Vader. So it was cool to play with my Slave I toy vehicle and send Boba Fett on new bounty hunting missions. I just couldn’t show my mom the frozen Han Solo that came with it when I was a kid. She was a big Harrison Ford fan, and not happy about his fate.

Return of the Jedi almost ruined Fett for me, though. The jetpack jump from the Sail Barge to the skiff? Awesome. Everything after that? Oh man, that was hard to take. What do you think? Did Boba Fett’s reputation get taken down a notch for you due to his seeming death by equipment malfunction?  Share your thoughts in the comments.