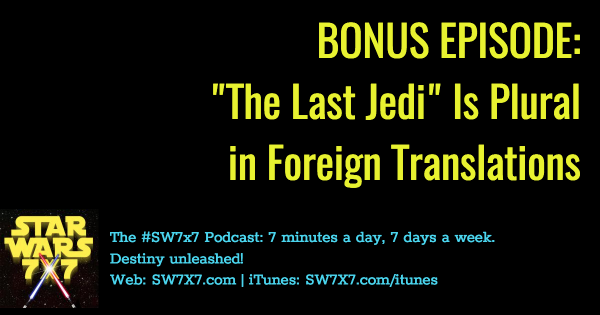 In case you missed the news last Friday: Five different foreign language translations of “The Last Jedi” showed up on social media, and all of them – Spanish, Portuguese, Italian, French, and German – used plural version of “The” and “Last” in their versions of The Last Jedi. Here’s the Italian version for you…

I took a poll on Facebook in a couple of Star Wars groups, and asked for opinions on who the last Jedi are. With 64% of the vote, Luke and Rey won out as the favorites for being the plural last Jedi.

In second place, with 16% of the vote, was the notion that it referred to Luke and the now-dead students of his upstart Jedi Academy, before Kylo Ren went all Anakin and slaughtered them. Third place was the idea that it’s Luke and Rey and a new crop of students that Luke could be training, and in last place was the idea of a whole new set of Jedi unrelated to Luke.

There were a couple of write-in votes, too – one with Luke, Rey, and Finn as a twist; one for Luke and the Force ghosts; and an “I don’t care” vote, too. What’s your take? Do you care, and if so, who do YOU think the last Jedi are? Share your thoughts in the comments!