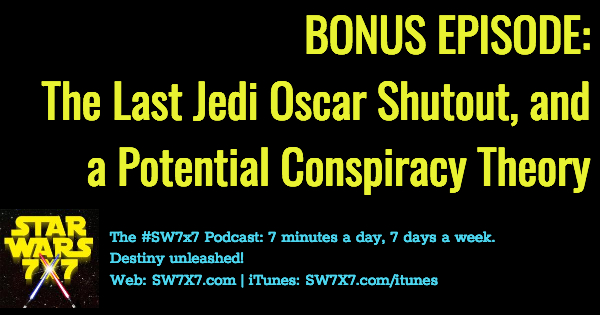 With four nominations and zero wins, The Last Jedi was shut out of the Oscar celebration on Sunday night.

And this would be the seventh Star Wars production in a row to be shut out from the annual awards – a streak now spanning 37 years. Since the last winner was Best Sound Mixing for The Empire Strikes Back, it makes a person wonder: How much might this have to do with Hollywood holding a grudge against Lucasfilm and George Lucas over the opening crawl that caused Lucas to pay a $25,000 fine and quit the Director’s Guild?

On this bonus episode of the podcast, I’m recapping the categories in which The Last Jedi was nominated, which movies took home the Oscars instead, and also looking at the scientific and technical awards which acknowledged Lucasfilm’s influence on the industry, both historically and as a current innovator.

I’ll also be digging a little deeper into the notion that maybe, just maybe, the lack of any major annual awards in all this time is starting to seem a little suspicious…