Three Star Wars comic book series had issues published today, including one with Luke Skywalker’s possible great-grandson. Who from the Expanded Universe (aka “Legends” now) do you think the new Star Wars movies will use as characters? Have your say in the comments!

Lucas tells parade magazine that the Star Wars saga will be 9 parts!! 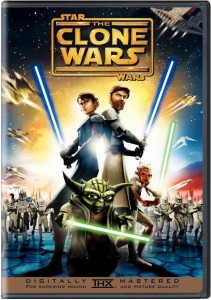 It’s funny to hear all the talk about “Star Wars Seven this, and Star Wars VII that, and Episode 7 the other,” when, technically speaking, there’s already BEEN a Star Wars 7.

What I’m talking about is The Clone Wars, and it’s shocking that so many people talk about how allegedly bad the prequels were, when this movie is the one that professional critics clearly hated the most. It got an 18% consensus rating on Rotten Tomatoes, and the Wikipedia entry points out that both Ewok movies and yes, even the Holiday Special, got better reviews overall. So that’s saying something. And yes, we should talk about the Holiday Special, and the Ewok movies, and the Ewoks cartoon, and the Droids cartoon, and the Clone Wars pilot cartoons from 2003-ish…which we’ll do in future episodes for sure.

But back to this Clone Wars. The actual cartoon series debuted to very positive feedback, and my understanding is that it only gets better over time. I have to admit, I haven’t seen it all, and if that breaks my Star Wars street cred, so be it. I want to very badly, though. Maybe I’ll binge watch a season during the next snowstorm. Life’s busy, you know…

So it’s a retroactive surprise to see the animated movie and be underwhelmed. I saw it in the theater, and had the experience of taking my older son to see a Star Wars movie in an honest-to-goodness movie theater for the first time, so I’ll always think of it fondly, even if it was just ridiculous.

However, I disagree with the large group of people who didn’t like Ahsoka Tano. The cast definitely benefits from the additional female heroic presence, and Lucas has said it was supposed to help explained how Anakin went from “brash padawan” to “reserved Jedi Knight.” I’ll buy that, especially since the idea is then placed in the hands of someone else to write and direct it. I liked the Jedi abilities, too…definitely exaggerated, but heck, what would expect from a cartoon, anyway? The environments were beautiful, too. It’s just too bad the people and aliens were so barely and badly animated.

And as for the story of the movie itself, gosh, it’s about as disposable as they come. Searching for Jabba’s kidnapped son that they keep referring to as “Stinky”? Look, I’m sorry, I know these movies are supposed to be “for the kids,” but let’s face facts. It’s the parents that are taking the kids, and it’s the parents that are deeply invested in Star Wars, to the degree that they WANT to take the kids to see the movie, and get them in front of the TV show. And it’s fair to hold Star Wars to a way higher standard, because it IS a cultural touchstone. Story above all with Star Wars, and it was a clean whiff on this one.

I rewatched it again recently with my second son, now six, and as with the other live-action-movie movies, he didn’t seem to be as displeased with all the things I nitpick over. I still say that’s not ideal. The original Star Wars movies are a set of magic. They appeal to ALL ages, and they hold up. Media seems to be becoming more disposable these days, and it would be a thrill to get a Star Wars movie that my kids ask me to see again…and again…and again… like I did with my mom all those years ago.