I was at the Boston Comic Con last month, and saw some guys selling Star Wars t-shirts, including one that said, in an easily recognizable Star Wars font, *bleep* Lucas.  Earlier this week, our Force Feature touched on Patton Oswalt’s comedy bit on using a time machine to go back to 1993 or 1994 to kill George Lucas with a shovel in order to prevent the prequels being made. And then there was that Gotye video parody, instead of “Somebody I Used to Know,” it became “The Star Wars That I Used to Know.”

These are just a few examples of how worked up people get over the prequels, and over the changes Lucas keeps making to the originals. Heaven knows I myself have said things along the lines of “Why, Lucas, why?” in lamenting some of the moviemaking decisions he made.

I’ve heard the opposite end of the spectrum, too, which amounts to a “How dare any of us criticize what the Master has wrought?” It’s his vision and his money, and he can do with it whatever he darn well pleases. And hey, if it’s lasted this long and gotten as big as it has, who are we to judge?

I got to thinking about this in terms of a new movie that’s coming out, The Interview, with James Franco and Seth Rogen. In it, they play celebrity journalists who manage to land an interview with North Korean supreme leader Kim Jong-un, and then get ordered by the CIA to assassinate Kim.

Predictably, North Korea is up in arms about this, saying, “The production and distribution of such a film on the assassination of an incumbent head of a sovereign state should be regarded as the most undisguised sponsoring of terrorism as well as an act of war.” And look, can you blame them? I mean, if a Chinese filmmaker, for example, made a popular movie about assassinating Obama, or George W. Bush before him, we’d be up in arms about it, right? As we should be.

So in my mind, the *bleep* Lucas shirts and the killing Lucas with a shovel stuff…I get it, and it gets a laugh from me, but I really do think it’s out of line. The Gotye parodies are much more my speed.

There has to be a healthy, balanced dialogue about the films, because it’s no good to rubber-stamp them, either. I mean, I don’t want to blow my ticket to go to Skywalker Ranch just because I said Lucas and Hales’ dialogue in Attack of the Clones is rather awful. But I’ve gotta say it if I think it. The legendary broadcaster of Dodger Baseball, Vin Scully, was advised early on in his career not to be a “homer” – an announcer who was openly rooting for the team for which he was announcing.

None of us talking about the Star Wars movies, TV shows, books, comics, you name it, none of us should be homers. We have to feel what we feel about Star Wars, and I think we have a right to, and the reason why is because I don’t believe this really belongs to George anymore. Not in the sense of his having sold it to Disney…I mean in the metaphysical sense, that Star Wars is what it is because we care about it. At a certain level, I get the whole “It’s his ball, he can leave with it if he wants” mentality. I don’t agree with it, though. I think he’s created something that’s practically in the universal public consciousness, and it’s passed beyond the bounds of his control.

You’ve heard of these experiments where the thing you’re observing is changed simply by the fact that you’re observing it? That’s what Star Wars is now. And it’s up to Lucas, and J.J. and Rian after him, to take that into account as they work to make the upcoming movies the best Star Wars movies yet. 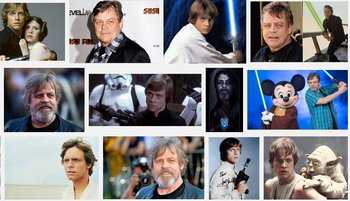 Let’s wish a happy birthday to Luke Skywalker himself, Mr. Mark Hamill! Talented, prolific, and committed by all accounts, and we’re all so very lucky to have him on board for Episode VII.

Today’s question: What was Obi-Wan Kenobi’s last line in The Empire Strikes Back?

Previous Post: 82: Star Wars Rumor and Spoiler Sources
Next Post: 84: Behind the Scenes and On the Road!