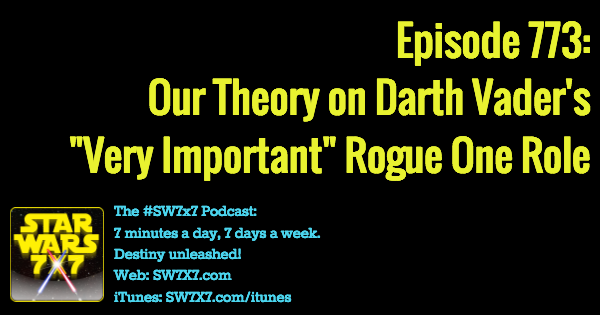 Here’s what we know about Darth Vader in Rogue One, according to Kathleen Kennedy via Yahoo Movies:

He has a very, very important part in the movie.

And via Entertainment Weekly:

He will be in the movie sparingly. But at a key, strategic moment, he’s going to loom large.

Here’s what I think Vader is up to in Rogue One. I’m convinced that one of his primary roles is to install the kyber crystals on the Death Star, in order to make it fully operational.

I’m going to share my reasoning in brief here, and I go deeper into all of this on today’s episode!

**We see the concave dish being installed on the Death Star, from out of which the superlaser will be fired.

**From the Star Wars Databank, re: the Death Star superlaser: “According to legend, the ancient Sith used massive kyber crystals to create superweapons; during the Clone Wars, the Geonosians revived the superlaser design.”

**Kyber crystals are attuned to the Force, and according to Luke Skywalker’s experience with lightsabers, the crystals can only be placed properly by using the Force in order to work properly, and to avoid damaging the crystals.

**The Death Star project is “long delayed,” and the band of Lothal Rebels had previously destroyed a shipment of kyber crystals that were bound for the Death Star.

**Though we don’t yet know much about the Death Star I construction timetable, the Death Star II as seen in Return of the Jedi was “behind schedule” until Darth Vader and the Emperor arrived on it. It was not armed and operational until after they’d been there a while, and they didn’t need to finish the structure of the space station to do it.

**Regarding Jedha, Lucasfilm says, “At one time a world important to the Jedi Order, Jedha serves as a holy site for pilgrims from across the galaxy who seek spiritual guidance.”

**And in an interview back in July, right after Star Wars Celebration Europe, Donnie Yen told CNN that “Jeddah [sic] is a very important planet because that’s where they found the elements to build the lightsaber.”

Based on all of the above, these are my theories about the plot of Rogue One and how Darth Vader is involved in it:

1. Jyn Erso and Cassian Andor go to Jedha to investigate the weapons test, connect with Saw Gerrera and his band of Rebels, and learn about the kyber crystals and the Death Star.

2. Darth Vader’s “important role” is to secure sizable-enough kyber crystals to power the Death Star, and to set them up properly within the Death Star.

3. The Death Star arrives at Jedha for Vader to install the kyber crystals and test the weapon.

4. That giant maelstrom we see in the most recent trailer seems Jedha-colored, making me think the Death Star tests its superlaser on Jedha, which would be in line with their desire to eliminate all forms of religion as well.

So that’s the scoop – Darth Vader appearing in Rogue One to make the Death Star Superlaser go boom!