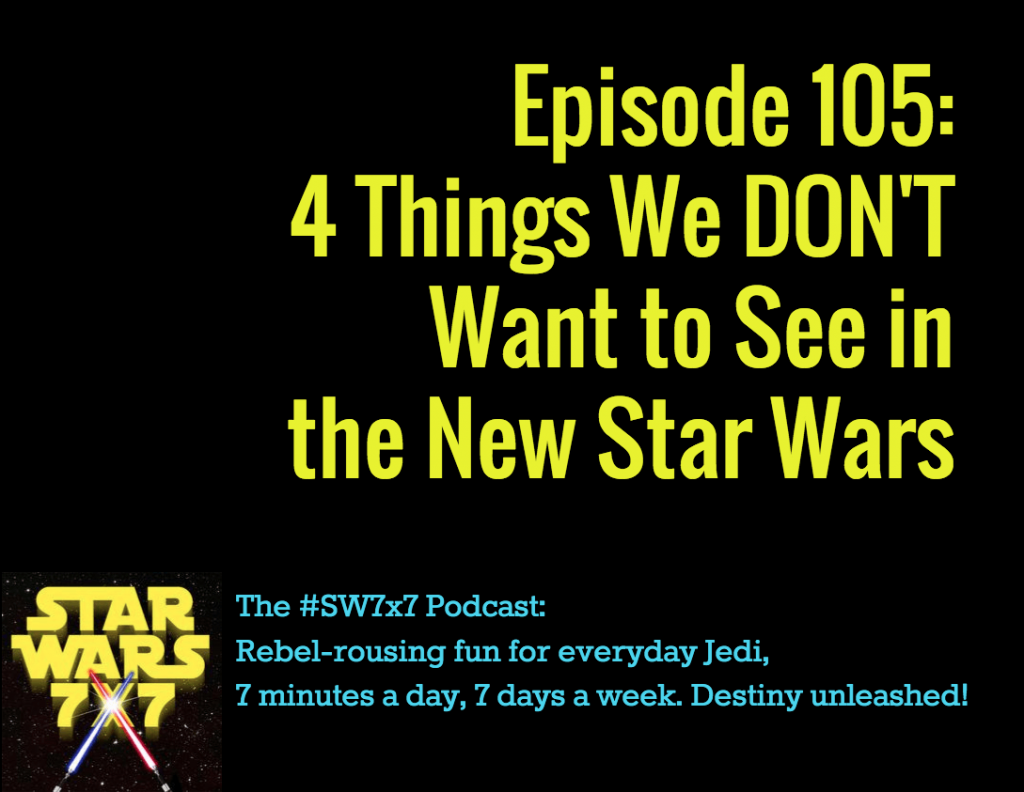 Well, we’ve spent the last two days together talking about what Star Wars: Episode VII has to have in it, to make it feel like a real Star Wars movie, drawing on some of the commonalities that all six previous movies share. So today, let’s turn the tables around a bit, and talk about what we definitely DON’T want to see in the new Star Wars movie.

1. Child actors. I promise you, this is not a specific knock on Jake Lloyd, no one deserves to go through what he went through. I’m just saying that it’s darned risky to cast a kid, any kid, in a movie as high profile as a Star Wars movie. Most kid actors just don’t have the chops, and that’s not their fault – they’re just kids. And furthermore, it may not even be a humane thing to do. How many child actors do we know who have made it into adulthood, while still being as reasonably well adjusted as the rest of us, and still working regularly in the field of their choice? The list is really, REALLY short. So let’s not take chances, for any number of reasons, okee-day?

2. Musical numbers. I’m a bit conflicted about this, because I still kind of like the original Sy Snootles and Ewok Celebration numbers in Jedi. Maybe that’s just nostalgia talking. And the less said about the Special Edition musical numbers, the better. But thankfully, only one of the six movies had musical numbers, as opposed to just having a band playing like in the original Star Wars.

3. Henchmen you can’t take seriously. Okay, so the Battle Droids of the Prequel Trilogy aren’t your usual “henchmen,” per se. But there’s a difference between seeing enemies get knocked out comically, and enemies being idiots before they’re knocked out. There was a funny moment in the premiere of Star Wars Rebels – there were a few, actually, but the one I’m thinking of is where Ezra backs the speeder into a bunch of stormtroopers before peeling out, and a last lone stormtrooper comes around the corner to see what had been going on, only to get run over by Kanan on his own speeder. Now that’s good slapstick. As opposed to The Clone Wars cartoon, where the Battle Droids were just there for comic relief. Like one getting knocked over and falling from a great height, shouting “Whhhhhhyyyyyyyyyyy!” on his long way down.

4. Another Death Star. Look, how many times do you have to build the thing before you get the idea that it ain’t gonna work? Fool me once, shame on you. Fool me twice, shame on me. Some renegade Moff in the Outer Rim somewhere is probably thinking, “Third time’s the charm!” If they do build another one, though, they might as well steer it to Geonosis and blow up their planet for the test run. That would serve them right for being the guys who created a design flawed enough that these two gigantic space stations could each get blown up by a single snub-nosed fighter and a Corellian freighter.

So that’s four things I definitely don’t want to see in the new movies. What are yours? Chime in at Facebook.com/sw7x7! 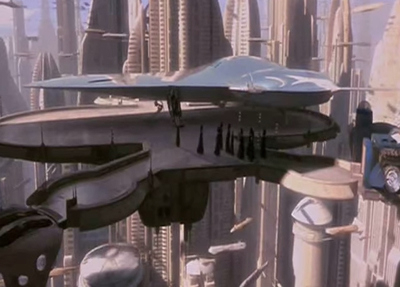 Ships flying by in the Coruscant skies are a treasure trove of surprises, according to the Easter Egg Archive. In The Phantom Menace alone, fans have reported seeing everything from school buses to Star Trek spaceships, from a variety of real world airplanes and helicopters to the Nazi tank from Indiana Jones and the Last Crusade, to Harrison Ford’s flying car from Blade Runner. What surprises have you found? Share them at Facebook.com/sw7x7!

In addition to their blasters, stormtroopers also carry one thermal detonator on their belt. #StarWarsRebels pic.twitter.com/WxME5CPcNC

Today’s question: How many ships did Han claim it would take to destroy a planet the size of Alderaan?