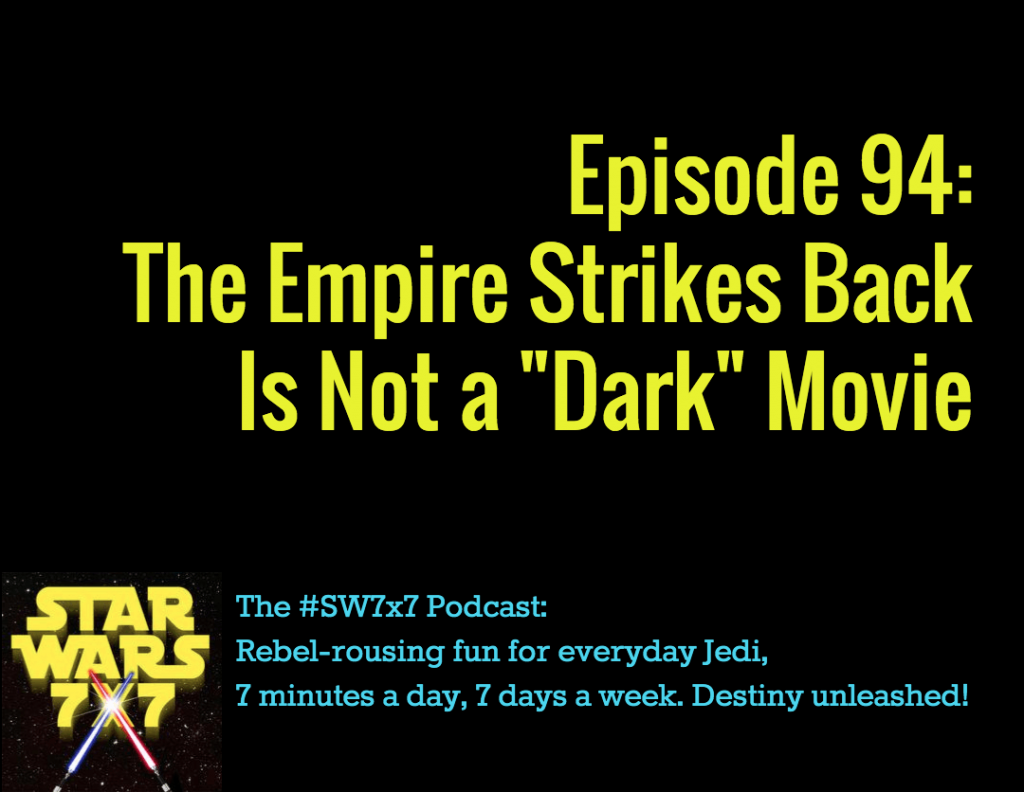 So I had the awesome opportunity to be interviewed for The Expanded Fandomverse Podcast last week, and in full disclosure, I had listened to their podcast prior to my own interview – just doing my research, and wanting to make sure I would be a good guest on their show.

There is a set of questions that they ask every guest, and in going over those, I had my answers at the ready for when the interview came. And one of those questions is, “What’s your favorite Star Wars movie, and why?” I said The Empire Strikes Back, because I love everything about Hoth. The Snowtroopers are my favorite variety of Stormtroopers, followed closely by the AT-AT Drivers. I love the AT-ATs themselves, almost as much as I love the Snowspeeders, which are my favorite Star Wars vehicle of all time. I love the gear the Rebels wear, right down to the hats and snow googles. I used to go into our local department store and search far and wide for a hat like the ones the Rebels wear on Hoth, and a fur-lined coat like Han’s. No dice, for reasons that shall become apparent.

Meanwhile, liking Star Wars for Hoth is unusual for a couple of reasons.

First of all, I grew up in Los Angeles, which, as some people like to forget, is actually pretty well in the middle of a desert, with droughts and everything. Snow? I had no idea what snow was! Well, kind of not. The 1980 Winter Olympics had been held in Lake Placid, New York that year, and that was the first Olympics I remember watching on TV. I got to see the US hockey team pull off the Miracle on Ice, and Eric Heiden winning five gold medals in speed skating, so maybe that had an effect on me. It didn’t make me want to take up hockey or skiing or skating, though. I wasn’t begging to go to Big Bear or Mammoth Mountain or any of the other big and reasonably nearby ski areas.

My mom did drive me north once, north enough to find snow, which if I remember this correctly, we pulled over on the side of the road once we’d reached a point where there was snow deep enough for it to seem like an experience. I wouldn’t say it was entirely magical, but it kind of was, especially to a desert city boy.

Now, I live in New Hampshire, where we get at least 10 feet of snow every winter, and where I no longer mistake my father-in-law’s snow blower for a wood chipper. You’d think that would have worn off Hoth’s charm for me but it’s exactly the opposite.  I like Hoth even more now than I did back then! Which reminds me, if Lucasfilm really went to Iceland, and the rumor wrasslers are right, that it could be Hoth again, I’m going to be even more beside-myself happy when Star Wars: Episode VII comes out.

So from my upbringing and my life experience, everything says I shouldn’t be able to enjoy those scenes the way I do. But I do…

The other unusual thing is related to something that The Expanded Fandomverse show co-host Tim McMahon said, which is back to the question of which movie people like best. Tim says that many of the people they’ve interviewed have responded with The Empire Strikes Back like I did. But most people cite it as their favorite because it’s darker than the rest of them.

Now don’t get me wrong, I like myself a good dark film from time to time. But Empire never struck me as “dark.” Quite the opposite, in fact. And if you started to say, “Well, Empire is dark because fill-in-the-blank,” I can easily fill it in for you, but I wouldn’t agree with you. Because from the moment I saw it, I was carrying around a fundamental belief that the good guys would always win. They won on the ice at Lake Placid when they were expected to lose.

So even if they got kicked off their snow base, even if one of their leaders got frozen in a block of carbonite and another lost his hand while dueling his evil father, they’ll always find a way to win. At the end of Empire, not only did Luke have a plan for getting Han back, he’d joined up with a whole fleet of Rebel ships! This, for me, is the movie where hope does not necessarily prevail, but hope endures without fail. And that’s why for me, Empire is anything but dark. 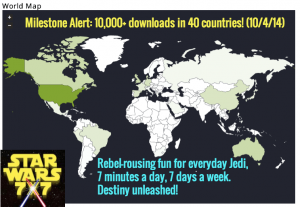 We’re coming up on our three-month anniversary tomorrow, and just last week, we surpassed 10,000 downloads and have now been heard in 40 countries! What an honor and a privilege it is to spend these 7 minutes a day with you, and I’m looking forward to what the next three months will hold!

Yesterday’s answer: Luke Skywalker, but really, Jabba kind of killed him – never should have put a Jedi in there with him in the first place!

Today’s question: What lame explanation did Han give for the shootout in the Death Star’s detention block?