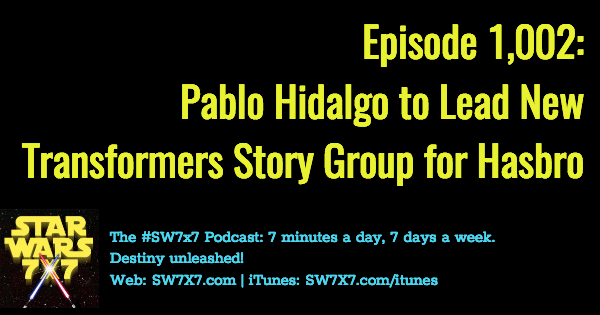 It seems like a match made in heaven! Lucasfilm and Hasbro already play nicely together, since Hasbro has had the Star Wars toy line for decades. And Disney gave the Princesses line to Hasbro not too long ago.

Now that the Transformers franchise is expanding, with the announcement of a Bumblebee standup movie getting in the works, it sounds they’ve decided to move beyond the Michael Bay world of explosions galore. They decided to build a Transformers Story Group, based on the model of the Lucasfilm Story Group, and they tapped Pablo Hidalgo to lead this effort.

Don’t panic, though! Pablo won’t be leaving Lucasfilm. The LFL team is letting everyone know in no uncertain terms that this is just a unique partnership arrangement that will allow him to split his time more efficiently, and nothing more. That being said, the implications are profound! For example, Paramount Pictures is the current distributor of The Transformer movies. If this “partnership” goes well, could a switch to Disney/Buena Vista be too far off?

Let me know what you think about this developing news story in the comments! And, scroll down for one more crucial aspect of this story…