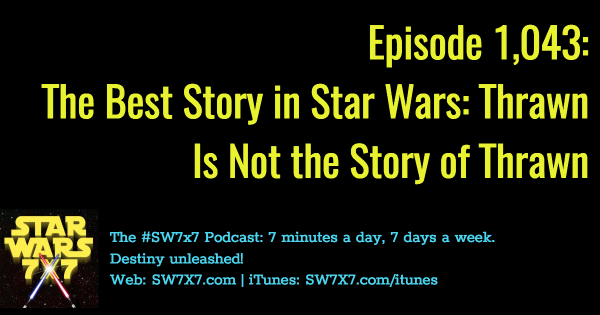 The brutal political eduction of Governor Arihnda Pryce is actually the best and most compelling of the storylines in Star Wars: Thrawn. Author Timothy Zahn has said that Pryce’s rise to power is supposed to parallel that of Thrawn’s in the novel, and to a degree, it does. Both find themselves having to learn how to maneuver in new worlds and spheres of activity. But that’s where they diverge.

Thrawn already has great military skill, but Price has to learn her political skills. Thrawn suffers little in the way of setbacks, and is recused regularly by other people, without his having to try. Pryce has multiple setbacks, and ultimately has to rely on herself to fix them. As such, hers becomes a more compelling narrative overall.

I’ll share the broad strokes of her rise to power in today’s podcast, where the depths of the ruthlessness she learns will be used to catastrophic effect.

Today’s question: Where were the exterior Lah’mu scenes filmed?