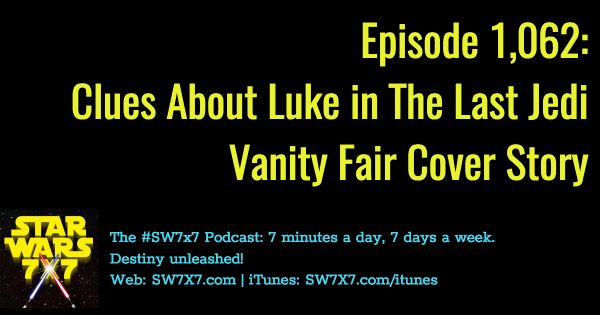 I’ve saved the best of last…

In my ongoing series of looks at the Vanity Fair cover feature on The Last Jedi, I’m coming to the juiciest bit of the reveals – the cover story itself. Today in particular, I’m looking at Luke’s role in the movie, what we learn about it and what we learn about him as a character. Rian Johnson says that he started out by trying to determine the most difficult challenge for each character, and Luke was at the top of his list. What could that mean? I’ve got a theory or two, and it’s in the podcast. I’d love to hear YOUR theories in the comments!

Also, this quote from Oscar Isaac should have you very, VERY excited:

So to be there, and to watch Mark revisit Luke, particularly in these scenes we were shooting towards the end of the film, was bizarre and jaw-dropping. It’s like when you see an old band re-unite and go on the road, and they don’t quite hit those high notes anymore—though in this situation it’s completely the opposite. It’s the fulfillment of where your imagination would take you when you imagine where Luke would go, or what he’s become.

If that doesn’t suggest to you that Luke will have some incredible Force power, I don’t know what does.

It’s hard to say what “towards the end of the film” means, though, because Isaac could be talking about the shooting of the film, which of course happens out of order, so the “end” might be happening anywhere in the movie. But if Luke were to unleash a massive display of Force power, wouldn’t you wait to play that card until the end of the movie? Say, the way they saved Yoda going wild for the end of Attack of the Clones? Yup, I thought you might … either way, I can’t tell you how excited I am to see what kind of power Luke can wield.

Today’s question: What part of Tivik’s body was injured?