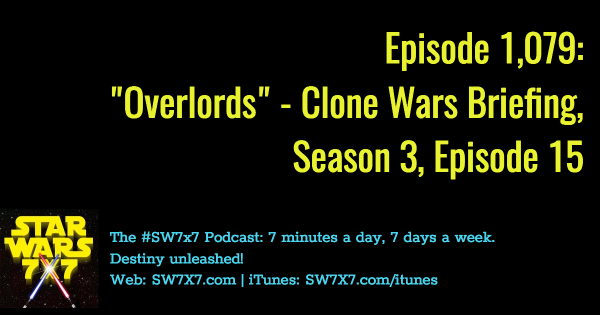 We’re getting back into the Clone Wars Briefings at a critical point in the series, where a lot of the mysteries of the saga are playing out. The “Mortis” arc kicks off with “Overlords,” episode 15 from the third season of the Star Wars cartoon series. (Here’s the link for the full episode rundown, which is also from where the image comes.)

There’s a very interesting parallel between one of the key points of the story – Anakin and the guilt he carries – and what you and I were talking about on the podcast yesterday, regarding Luke and the guilt he carries. I get deeper into that in the podcast, as well as the whole bringing “balance to the Force” thing that Anakin’s supposed to do, which manifests in a very literal if metaphysical way in this episode.

Today’s question: How is Yavin IV described onscreen via subtitle in Rogue One?