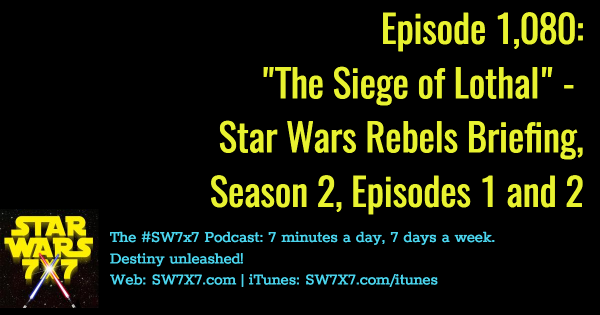 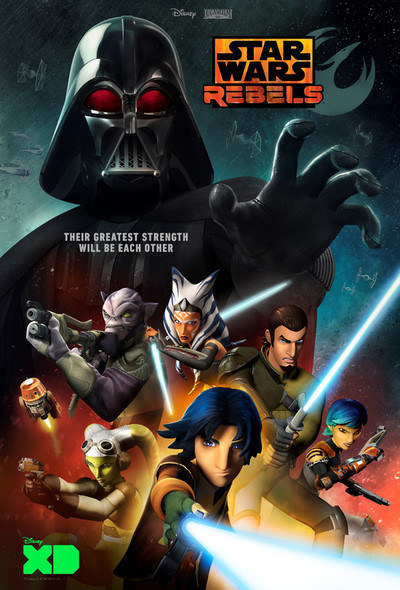 Welcome back to a series of Rebels Briefings! While we await the debut of Season 4, I’m catching up on Season 2 for the podcast, so I’ll have a record of coverage on all of the episodes of the series. Up first is “The Siege of Lothal,” the “movie” premiere (it’s really just two back-to-back episodes) of season 2. For our purposes, we’re going to refer to them as episodes 1 and 2. (Here’s the full episode rundown on Wookieepedia, from where the image also hails.)

Vader figures prominently in the episode, and for as tough as he is – throwing Kanan and Ezra around like rag dolls, nearly making Ezra cut his own head off with his own lightsaber, deflecting a blaster bolt from Sabine right back at her helmet, surviving having two AT-DP walkers dropped on him, decimating a squadron of A-wings – he is also more forgiving than usual. He passes up two separate opportunities to Force choke people that he definitely would have choked if this wasn’t a kids cartoon. Not a complaint, just an observation.

The gist of the story: Vader wants to lure the Rebels out, and wants to turn the screws on Lothal to do it. Lothal’s Minister Tua fears for her life, so she contacts the Rebels to ask for asylum in exchange for information. They agree, but Agent Kallus suspects Tua, and (offscreen) must have informed Vader of his suspicions, because Vader has her escape shuttle rigged to explode and kill Tua.

The Rebels are trapped, manage to escape but need another way off planet. They concoct a scheme with the help of Lando, and do get off Lothal, though Vader has the Tarkintown settlement burned to try to keep drawing them out. But of course, there’s a tracking device on their escape shuttle, and Vader tracks them to the Rebel fleet, where his TIE Advanced X-1 is apparently powerful enough to take out a Corellian corvette all by its lonesome.

Naturally, the Rebels get away, but in the process of the battle, Ahsoka and Vader connect with each other mentally, revealing to Vader that Ahsoka is alive. Ahsoka, for her part, says she doesn’t know who the Sith Lord is, but you can tell she has some idea that she’s trying to puzzle out for herself.

A pretty slam-bang start to the season, for sure! It’ll be interesting to see if Vader shows up in season 2 as often or more so as Thrawn did in season 3. I’m hoping for more, personally, because it’s Vader and because I think he has a lot more potential for creating excitement onscreen than the more cerebral Thrawn does and did…

Today’s question: How is Eadu identified via subtitle onscreen in Rogue One?