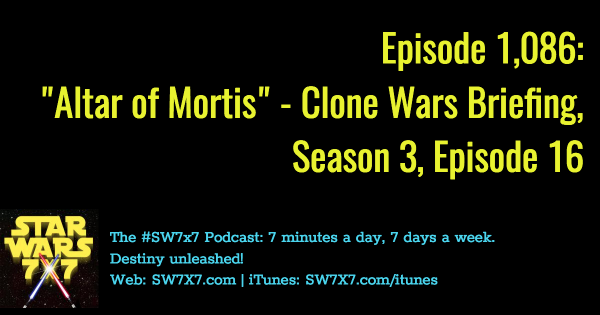 It’s time for another Clone Wars Briefing! This time, I’m looking at “Altar of Mortis,” episode 16 from season three of the Star Wars TV series. This is also the second of a crucial three episode arc that digs deeper into the nature of the Force, and raises the level of the Star Wars story to straight-up mythology. (Here’s the full episode rundown on Wookieepedia, from where the image also comes.)

In brief: The second act of the Mortis Arc features the Son helping the Father’s death along with a zap of crazy red dark-side lightning. The Son also tries to push Anakin’s buttons by kidnapping Ahsoka, then putting a bite on her to put her under the influence of the dark side.

Anakin wants to chase after Ahsoka, while Obi-Wan recommends getting the Father’s help first. They don’t agree, so they go off and do their own things anyway. Anakin fights evil Ahsoka to a stalemate, while Obi-Wan is guided by the Daughter to the Altar of Mortis, where he can get the Dagger of Mortis, the one weapon that can kill a Force-wielder.

After Obi and Ani fight Ahsoka to another stalemate, and Son and Daughter also fight to a stalemate, the Father shows up and smacks both Son and Daughter through a window. Alas, it only ticks off the Son, who Force-lightnings daddy to within an inch or so of his life. Obi thinks Anakin needs to strike the deadly blow on the Son with the Dagger of Mortis, and tries to throw him the dagger, but he makes what is likely the worst throw in Jedi history, and Ahsoka intercepts it, then turning it over to the Son.

The Son tries to strike down the Father, but the Daughter throws her body in front of the blade to protect the Father, and gets herself killed while also ticking the Son off to no end. The Son leaves, and the Daughter uses what remains of her life force to clear Ahsoka from the dark side influence and make her whole again.

This doe sbeg the question – is Ahsoka imbued with the Daughter’s intense level of light-side energy now? Is she even more powerful now than we can imagine? I think we’ll have a better idea of that when (not if, when) we see her in season 4 of Star Wars Rebels.

Today’s question: Where is Cassian’s informant hoping to go after his meeting with Cassian?