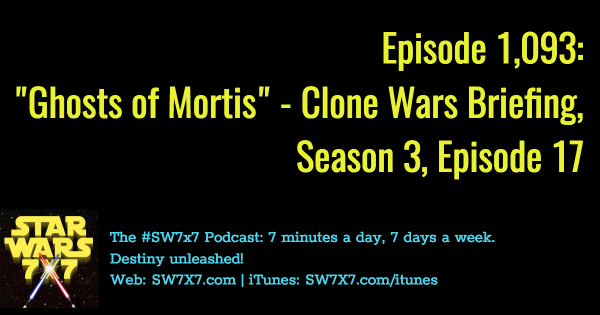 Welcome to another Clone Wars Briefing! We’re closing out the “Mortis” arc with “Ghosts of Mortis,” episode 17 from season 3 of the Star Wars TV series. (Here’s the full episode rundown on Wookieepedia, from where the image also comes.)

With another guest appearance by Liam Neeson as the ghost of Qui-Gon Jinn, the fact that they shelled out for his services during a set of midseason episodes (during a sweeps period, granted) means we should pay close attention to this set of episodes. Not only that, but we’re really digging into the nature and mystery of the Force with these episodes.

There’s a scene in the episode where the “Father,” one of the powerful Force wielders on Mortis, knocks Anakin out with a touch of the finger to Anakin’s forehead, and wipes his memory of the terrible visions shown to Anakin by the “Son.” (Visions of Anakin’s fall to the dark side, as it happens.)

This is the one that potentially has implications for the Sequel Trilogy, as it supports the possibility Rey could have ben mind-wiped before she was dropped off on Jakku. I follow that rabbit hole in the podcast to some very exciting possibilities about Luke and his abilities in The Last Jedi.

Have a listen, then share your thoughts about Luke’s soon-to-be-revealed powers in the comments!