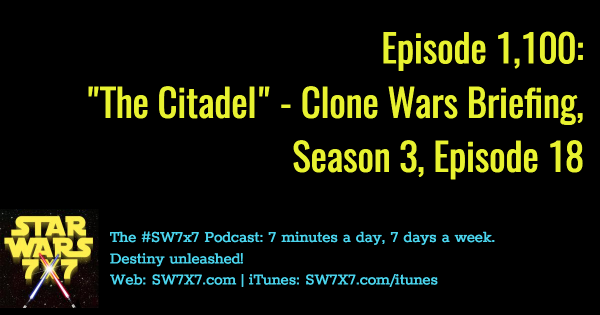 I’ve spent a lot of time talking about the podcast itself over the last week, so I thought to myself, what better way to spend the 1,100th episode of the podcast than by talking about a fun Star Wars story! Hence, this Clone Wars Briefing on “The Citadel,” episode 18 from season three of the Star Wars TV series. (Here’s the full episode rundown on Wookieepedia, from where the image also comes.)

The story centers around a Jedi master with knowledge of a secret hyperspace route that connects deep into Republic and Separatist territory. Said Jedi has been taken captive and brought to The Citadel, a prison designed to hold Jedi and from which no one has ever escaped.

The plan to get in involves Artoo giving himself the rank of Commander and ordering battle droids around, while Anakin, Obi-Wan, and the rest of the strike team get carbon frozen to avoid the life sign scans. Carbon freezing! It adds a whole new dimension to the scene from Empire in the Cloud City carbon-freezing chamber.

I’m talking about that in today’s podcast, about Artoo and Threepio’s latest dust-up, and a fateful first meeting between two characters who are currently on the side of the good guys … but it won’t last for too much longer.

Today’s question: How many Death Troopers search the cave where Jyn is hiding in the hatch?