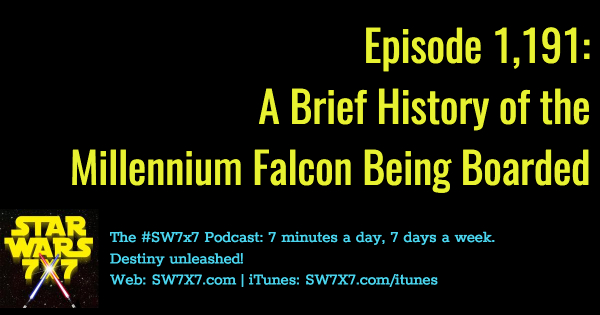 After yesterday’s episode, when it occurred to me that the shot Ron Howard shared from his director’s monitor on the set of the Han Solo movie seemed like it could be showing a hostile boarding party within the Falcon‘s corridors, I got to thinking about how many other times the Falcon has been boarded or referred to has having been boarded in the Star Wars movies.

Meanwhile, there’s only one movie where we actually see the Falcon get boarded. That, of course, is the original Star Wars, when stormtroopers and scanning crew soil the Falcon with their evil boots.

In The Empire Strikes Back, we don’t see the Falcon boarded. But we know it was, because Admiral Piett was ordered by Vader to have his men disable the hyperdrive. They would have had to go inside the Falcon to do it.

And in The Force Awakens, we don’t see the Falcon boarded, but in the deleted scenes, we get to see Kylo Ren rolling around his old playground with a couple of snowtroopers.

Which means that the only movie during which the Falcon remains unboarded by any hostile party is Return of the Jedi.

And incidentally, how DID the Cloud City Central Computer (CCCC) know that the Falcon‘s hyperdrive was de-activated? The Imperials wouldn’t have logged that action in a Cloud City computer for any reason whatsoever. How would the CCCC have found out? Share your thoughts in the comments.