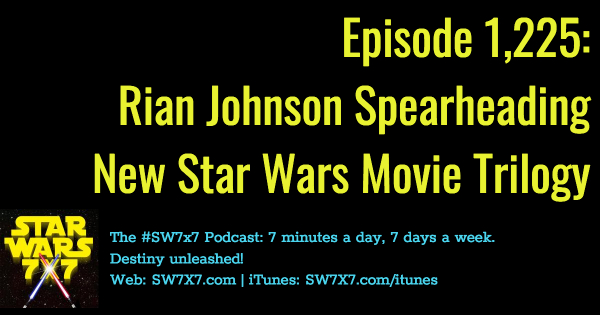 And to think, just last week on The Star Wars Show, Kathleen Kennedy innocently told us that they were starting to talk about the next decade of movies, and what might happen next with Rey, Finn, Poe, and BB-8. So casual, so general, as to lull you into thinking that no news about that was imminent.

And yet, she had to have known that eight days after her interview aired, Bob Iger would be revealing the big news to the world – Lucasfilm has tapped The Last Jedi writer/director Rian Johnson to create a new trilogy of Star Wars movies, while writing and directing the first one himself. (Here’s the official statement from Lucasfilm on the news!)

On today’s podcast, I’m sharing all the relevant audio clips from The Star Wars Show, and making preliminary predictions about the answers to the biggest questions raised by this announcement:

–When will the first of these new movies debut?

–What will Rian’s involvement be with the other two movies?

–Where is this corner of the galaxy that’s never been touched before in Star Wars lore?

–Have we already met the characters who will be starring in this new trilogy?

–When in the new canon timeline will these movies take place?

–What does this announcement tell us about The Last Jedi?