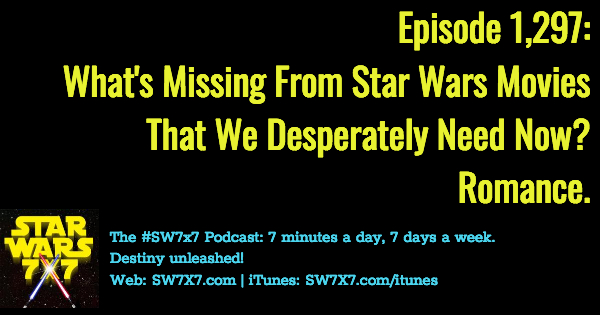 From a certain point of view, at least. Lucasfilm is looking at $1.2 billion in the bank from The Last Jedi and probably thinking, “Romance, schmomance.” And in a way, they wouldn’t be wrong.

But think about all the ‘shipping that’s been happening for the last three years. Rey and Finn. Finn and Poe. Poe and Rey. Rey and Kylo Ren. (Yup, that was a thing even back in 2015.) Even Kylo and Hux is a ‘shipping thing in some circles, even though Hux was about to kill the unconscious Kylo in The Last Jedi.

We as fans desperately want romance in our Star Wars movies. And we haven’t been getting it.

I will say, though, that I’m glad we didn’t get it in Rogue One. Having Jyn and Cassian hook up in that movie would have been as contrived as Sandra Bullock and Keanu Reeves hooking up in Speed.

But the Saga movies … that’s a different story.

Ask yourself, which Star Wars movie is consistently hailed by critics and fans as the best Star Wars movie of all time? That would be The Empire Strikes Back. Which is the only one of the Star Wars movies with a credible, well-executed adult romance that’s – well, “consummated” is not the precise word I’m looking for, but it’s an authentically completed romance where both characters have believably given in to their feelings and fallen in love with each other.

The only other movie in the Saga that has something resembling romance is Attack of the Clones, often reviled as second-to-last or dead last in the list of Star Wars favorites. Over the years, I’ve become kinder to that movie. The scenes with Anakin and Padme on Naboo seemed so stilted at first, and that nighttime scene where Anakin is just losing his mind over Padme is so awkward and uncomfortable. It feels so poorly written, and the dialogue sounds so awful.

But I’ll tell you, when I look back at the journals I kept when I was a teenager, it’s just so terrible. At the time, I *thought* what I was writing was incredibly profound and poetic. Now, it just makes my skin ache with how it reads. And what I see on the page is what I see onscreen in Attack of the Clones. I think I disliked it because it just hit too close to home!

Where Attack of the Clones fails for me now is that Anakin loses interest in Padme after that. Then it’s all about his mom, and then going to help Obi-Wan. And Padme seems to arrive at, “Yeah, he’s THE ONE and he’s all I’ll ever want” out of the blue Tatooine sky, without any real driving force or motivating factor behind her choice. Unless slaughtering Tuskens is what does it for her. I’d prefer to think it was a flaw in the writing than a weird bloodlust that caused Padme to fall in love with Anakin.

In Empire, by contrast, Han never loses interest in Leia, even when they’re in the belly of an exogorth.

We need romance in the Saga. And we desperately need it for Episode IX. If J.J. Abrams and Chris Terrio can give us even just a decent movie, but with a believable and charismatic romance, their movie will absolutely leap to into contention with Empire for the best movie in the Saga.

Do you agree? Disagree? Share your thoughts in the comments!