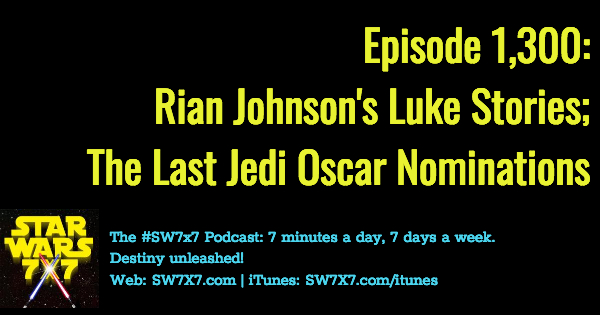 I’m taking a quick break from The Last Jedi Visual Dictionary because we hit the 1,300th episode mark today! Which is not technically accurate. This is the 1,335th episode in total, when you add in bonus episodes and the Episode #0 origin story way back when. But still, the 1,300th numbered episode. Still rather unbelievable. And yet … August 12th is when we hit the 1,500th numbered episode, which is the one I’ve really got my eye on. These in-betweens are neat mile markers to be sure, but the higher the number goes, it seems like I blink and the in-between milestones are there and gone.

On today’s episode of the podcast, I’m also stopping briefly to provide some historical perspective on The Last Jedi‘s four Oscar nominations:

Congratulations to all the nominees, and to everyone else not recognized by the Academy for the incredible hard work and dedication they put into The Last Jedi. I desperately wanted Mark Hamill to get at least a Best Supporting Actor nomination, but alas, it wasn’t meant to be.

Plus, Rian Johnson’s thoughts on what happened with Luke’s hand at the end of the movie, and a very awesome reveal about his source of inspiration for the amazing demonstration of Force power that put him on the surface of Crait toward the end of the movie…