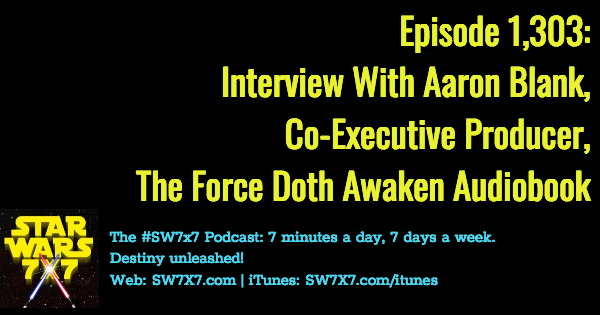 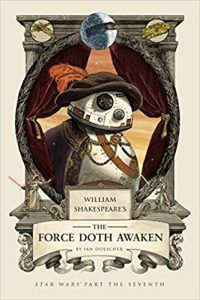 It’s one thing to merely read Shakespeare, and it’s another thing entirely to see it performed.

By the same token, it’s one thing to merely read The Force Doth Awaken, the Shakespearean-style adaptation of The Force Awakens by Ian Doescher. But it’s another entirely to bring it to life in an audiobook performance.

On today’s podcast, I’m interviewing Aaron Blank, co-executive producer for The Force Doth Awaken audiobook for Penguin Random House Audio, and you and I will learn together what it takes to add a whole new dimension to a story in the Star Wars saga.

Here are his particulars:

Aaron Blank is an Executive Producer at Penguin Random House Audio where he’s been producing audiobooks for 15 years. He’s produced a wide variety of audiobooks over the years, including numerous Star Wars audiobooks and last year’s Grammy winner for Spoken Word Album, In Such Good Company by Carol Burnett.

This is the first of two interviews with Penguin Random House Audio executive producers. In tomorrow’s episode I’ll be talking with Nick Martorelli about the audiobook production of From a Certain Point of View, and that one runs a bit longer, as we digress into discussions about the old NPR Star Wars radio dramas in the middle of our conversation.

Previous Post: Episode 1,302: Chewie and the Porgs, Or, How Wookiees Fatten Up Their Dinners
Next Post: Episode 1,304: Interview With Co-Executive Producer Nick Martorelli, From a Certain Point of View Audiobook