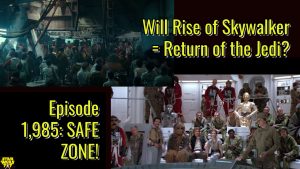 Welcome to the Safe Zone! The Rise of Skywalker is just 10 days away, and you can listen to or watch Star Wars 7×7 without fear. No spoilers will be shared on the show, but we will be talking about what we already know in this final run up to the end of the Skywalker Saga.

On today’s show: If The Force Awakens was at all similar to A New Hope (and, I would argue, also did the job of the whole prequel trilogy as well), and if The Last Jedi did similar work to The Empire Strikes Back (albeit in entirely different ways), then how might The Rise of Skywalker mirror Return of the Jedi? Based on the footage we’ve already seen, and interviews with J.J. Abrams, I’m flagging all the similarities between the two movies that I’ve spotted so far. Punch it!