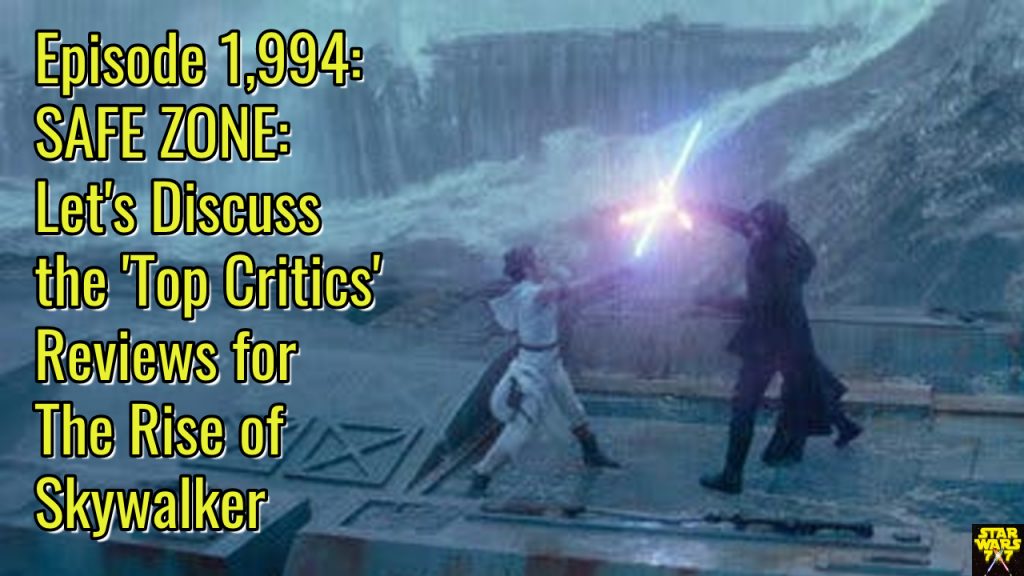 I wish someone had said to me, before the full critics’ reviews started to come online Wednesday, “This is not going to go the way you think!” And I wish I’d thought to say that in this episode of the podcast, too, but I only had the inspiration as I was writing this post to introduce this episode.

So the Rotten Tomatoes critical consensus continues to fluctuate, but it’s been in the fifties for most of the day Wednesday, topping out at 59% as of the recording of the show (10:00pm Eastern on Wednesday). The “Top Critics” subgroup has it at 49%. I’ve seen a couple of headlines claiming it’s the “worst Star Wars movie ever made,” but that’s currently inaccurate. The Top Critics scores for The Phantom Menace and Attack of the Clones are both lower than The Rise of Skywalker’s, though I understand full well the implications of that statement.

And yet… And yet… Even across the negative reviews, I’m seeing some consistent positives – the performances of Daisy Ridley and Adam Driver, the music from John Williams, how action-packed and visually dazzling the film is, to name a few – and I’m holding on to the reactions of some specific folks as a lifeline to the (very real) possibility that I will enjoy the heck out of it regardless of the critics’ reviews.

We’ll be talking about all of that, as well as why I’m on camera with a stain on my shirt. Punch it!