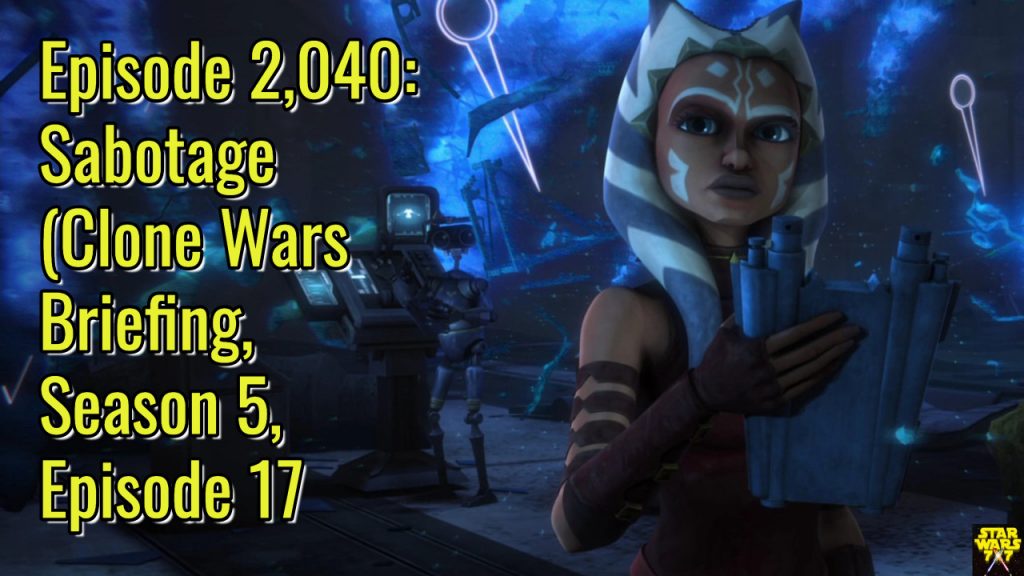 With season 7 of The Clone Wars coming to Disney+ starting February 21, I thought it would be a good time to catch you up on some of the stories that you may want to be aware of, or be refreshed about, prior to the debut of the final season. So we’re starting with the final story arc of season 5, and the first episode thereof, which is “Sabotage.” That’s episode 17 from season 5, to be specific.

Personally, I haven’t seen an episode of The Clone Wars since the middle of season 3, so I’m dropping in a bit ahead of where I was – like, two full season’s worth of episodes – and I have to say, I’m super-impressed. The complexity of the animation for the opening space battle, even for the few seconds it’s onscreen, rivals the complexity and fill-your-screen madness of the opening battle in Revenge of the Sith.

Additionally, the types of issues they address – either head-on, or with a side comment to let you know they’re thinking about these things – is also rather complex, too. I know this was intended for an older audience than, say, Star Wars Resistance, but it was still intended to be for kids. And yet, we’re getting nods to the poverty on Coruscant, the ethics of war and the Jedi’s involvement in it, and holographic re-creations of a bombing crime scene. This is pretty heady stuff.

So we’ll run the Clone Wars Briefing on this episode today, and we’ll also talk about what genre Star Wars actually is, or could be. Punch it!