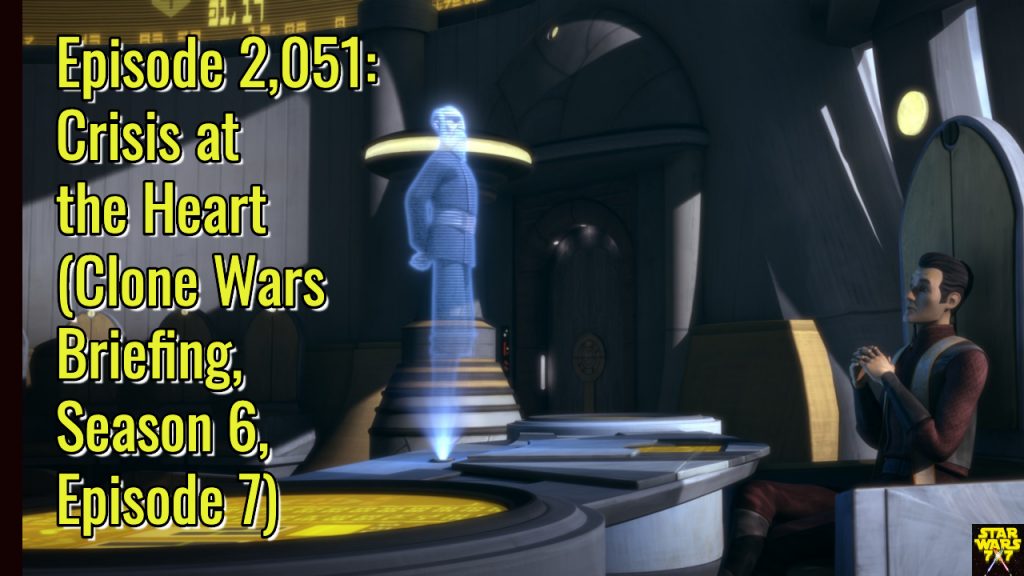 “Crisis at the Heart” is the seventh episode from season six of the Clone Wars, and concludes the Banking Clan/Clovis story arc. Honestly, this is a plot following the formula of The Phantom Menace, in its way. Instead of the taxation of trade routes driving the action, this time we’re talking about the interest on bank loans driving the action!

Specifically, Count Dooku has the leverage to entrap Clovis, just as Darth Sidious intended. Clovis wants to remain impartial in the Separatist/Republic conflict, but Dooku has the goods on Clovis. Where did Clovis get the information that caused the Banking Clan’s Core Five to get arrested, which resulted in Clovis’ own elevation to run the banks? Why, from the Separatists! That won’t make him look good in the eyes of the Republic.

And neither will raising interest rates on loans to the Republic, which Clovis does, or else Dooku will stop paying interest on Separatist loans and collapse the banks. I suppose it’s the Republic’s own fault for agreeing to variable rate loan terms, but I digress.

It may seem like it’s all about numbers, but that’s until the Separatists arrive with an invasion fleet, triggering a military response from the Republic, and then it’s all about the action! We’ll break it down in this Clone Wars Briefing, as well as the final showdown between Anakin and Clovis. Punch it!