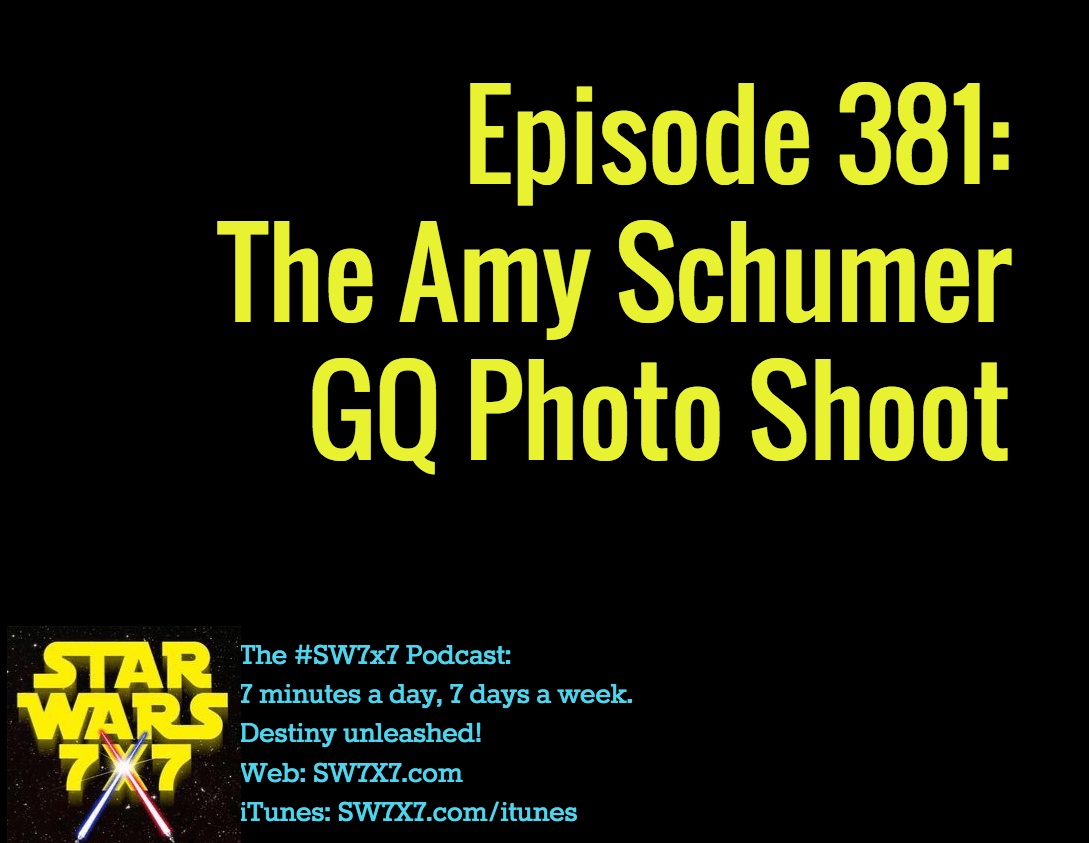 Okay, so before we begin: Here are links to the Amy Schumer GQ photos, and the Amy Schumer-designed alternate GQ cover. As we said in the podcast, though there’s nothing here you wouldn’t see in a PG-13 movie, you should consider them NSFW just in case, depending on the strictness of your workplace. And depending on how you raise your children, you may want to see them before you show them to your kids (if you deem to at all). Although, the humor may go right over some young heads. You know your kids, you know your life and tastes, so you be the judge.

Now, in case you had any doubts, here’s the official reaction from the Star Wars Twitter account, responding to a few different outraged tweets:

@CPThrio @icecoldpenguin Lucasfilm & Disney didn't approve, participate in or condone the inappropriate use of our characters in this manner

Nope, this falls under fair use, which covers satire and parody and commentary and so forth, and so not only is it allowed, Lucasfilm likely has no legal recourse, either. Personally, this is my favorite response, from none other that Luke Skywalker himself:

Got excited when I saw @amyschumer @GQMagazine pics & thought she was just cast in Ep 8! We should be so lucky.

Setting aside what you think about Amy Schumer or these photographs, let’s call this what it is: Newsjacking. It’s a term of art coined by David Meerman Scott, author of the seminal book The New Rules of Marketing and PR. Its definition:

The process by which you inject your ideas or angles into breaking news, in real-time, in order to generate media coverage for yourself or your business.

Some people do this in less controversial ways – imagine a professional resume writer doing an article with the headline, “4 Ways Star Wars Helped Me Write Better Resumes,” for example. And while Amy’s was more controversial, I’m willing to bet there’s been Star Wars fan fiction written over and over again about the kinds of scenarios depicted in the photos. In that sense, the pics were kind of “first-level,” so to speak.

The things I haven’t heard reported anywhere, which I’m most interested in, is whose idea this was (Amy? The photographer? GQ? A combo thereof?), and whether it was just done to be sensational, or whether they were trying to say something meaningful about what Star Wars means to people right now. The jury’s out, but it sure does feel like it was just for shock value.

What do you think? Did you like them, hate them, or couldn’t be bothered one way or the other? Have your say in the comments!

Today’s question: How many engines power a Y-wing fighter?