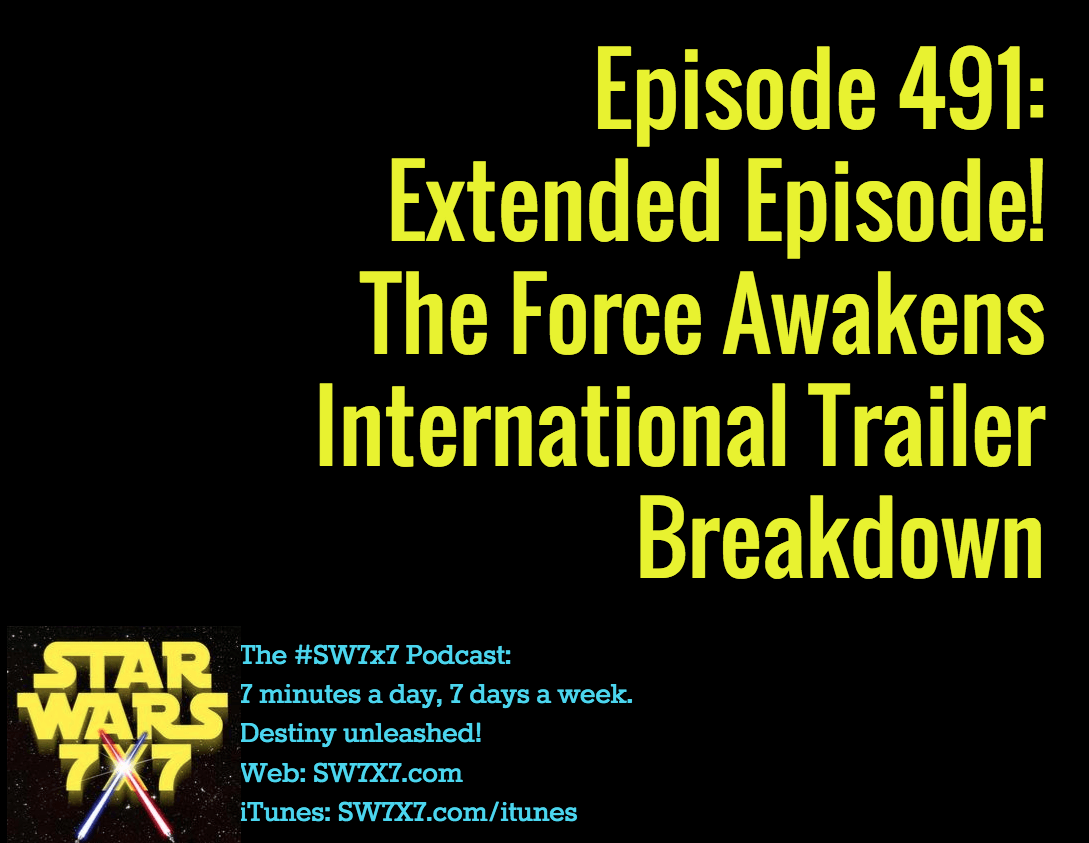 Ready for The Force Awakens Japanese trailer breakdown? Here we go! Listen to the podcast for full details and discussion, but here are the blow-by-blow moments from the new trailer, below the embedded video:

Then, the ship taking off and her looking, like with the last trailer.

Meanwhile, the voiceover from the last trailer. “Who are you?” “I’m no one.” And the Lucasfilm logo.

Sun setting over a desert landscape with moisture vaporators in the foreground, very Tatooine-y! Speeder going by in the distance, likely Rey’s based on its blocky shape.

Then, a new scene with Rey meeting BB-8, who beeps and blurbs for the first time in a trailer.

“Where do you come from?” Beep blurble. “I know all about waiting.” Beep blurble. “For my family.” As they walk away in the desert, building off what we saw in the last trailer. Does Rey know how to speak astromech? And more importantly, Rey is waiting for her family?! This seems to confirm a rumor that had been making the rounds, for what it’s worth…

Cut to black, then BB-8 burbles and runs off, Rey and Finn follow her to look. It looks like bright daylight, but then we cut to BB-8 in light that looks more like sunset, and then you see TIE fighters coming in ahead of the setting sun – a BEAUTIFUL shot!

Next, new Flametrooper footage of the trashing of a village, then the same footage of Captain Phasma walking through the village from the last trailer, and Kylo with a Force move from the second teaser.

Then Japanese characters on a title card! Time Magazine says the translation could be “Wake up,” or “She shall awaken,” or “It awakens” or who knows what else. Hmmmm…

Next up, Kylo in close-up and Vader’s melted mask in close-up, both from the last trailer, but the voiceover is partly different. “I will fulfill our destiny,” Kylo says. “Our” destiny? Interesting! Then, “I will finish what you started,” which we’ve heard before.

We also get a close up of Kylo lighting up his lightsaber, indoors, with control panels behind him. At Starkiller Base, perhaps? Or on a ship? And quickly, the shot of him striking from the second teaser.

Next another Japanese title card, which Time says translates as “A new generation is inheriting the world.” Sounds somewhat right, and yet I don’t know how much stock we can put in the ideas being translated into a different language…

Then it cuts to a scene we’ve seen before, perhaps a second or two longer, of Rey and Finn running from TIEs on Jakku, and the Falcon flying around Star Destroyer with TIEs chasing. Meanwhile, in voiceover, Rey and Finn finally introduce themselves to each other:

Now, X-wings locking S-foils into attack position on Takodana over the lake and the Stormtroopers preparing as in the last trailer, and the Knights of Ren from the last trailer.

Then, new! Leia in a command center, with a guy in the center of the frame out of focus who could be Ken Leung, a frequent player in J.J. Abrams movies. Also, a guy in the left of the frame with lots of white hair. Couldn’t be Dodonna from A New Hope, I’d think, he should be long past by this time.

We get another familiar voiceover from Rey: “There are stories about what happened.” More X-wing/TIE chases on Takodana, then a nighttime explosion on Jakku over a ridge, with BB-8 at first shrinking back from it, then rolling in a little closer.

Cut to Han, Rey, and Finn entering the castle from the last trailer; then the passing of the lightsaber to Leia from the 2nd teaser; and then Rey, Finn, and Han on the Falcon with a slightly different voiceover from Han:

Next, a great POV shot from the S-foils of an X-wing, looks like it’s over Starkiller Base, but the scene quickly cuts to Takodana and another dogfight clip from the last trailer.

After the X-wing destroys the TIE, we get Rey running on Jakku to get her staff, and Finn in the snowy forest igniting his lightsaber. It looks like Rey is running on the side of a leg of a fallen AT-AT, based on a joint that appears in the right of the frame.

Next, we get Chewie somewhere indoors, pipes and grates above him and he roars. There’s a close-up of him with something in his hand – he presses a button, then we cut to the explosion from the last trailer, with an extra angle of chaos right before it.

After that, we see Rey in the forest with Kylo. Based on the angle of the shot, it appears Rey is on her knees, and Kylo brings his crazy lightsaber up to her neck while standing behind her. The fear on her face is just superb, acting-wise.

Back to BB-8 burbling in the astromech slot from the last trailer, with Poe about to get into the dogfight over Starkiller Base as the music swells.

We get the black screen as the music disappears, and then we see Rey crying over the body from the last trailer. In voiceover, the presumed voice of Maz Kanata saying, “Hope is not lost today. It is found.”

What a wild ride! What did you think of the new trailer? Have your say in the comments!