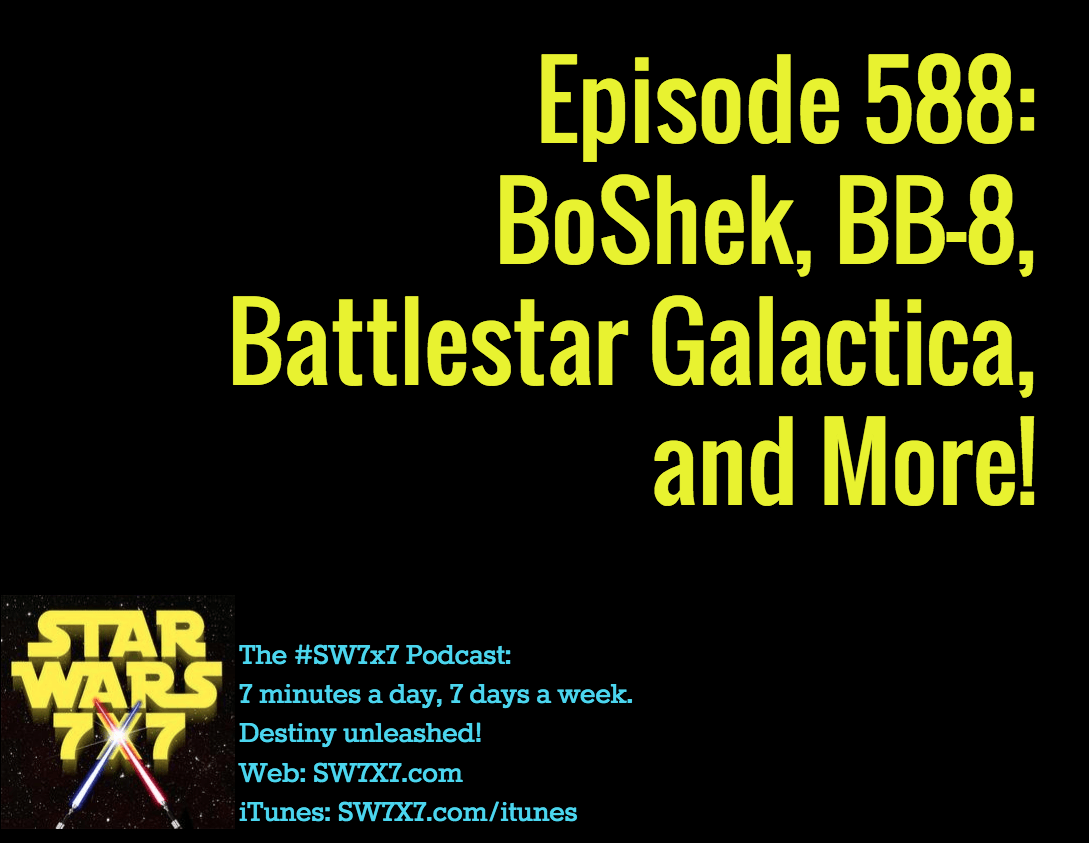 Today, we’re clearing the decks! There’s been a backlog of Star Wars news we haven’t shared, stuff that’s interesting but wouldn’t necessarily be fodder for a full episode. So here are a few quick hits for you!

First off, I don’t mean to be cynical, but the timing of this sure is fishy. NOW they decide to turn Battlestar Galactica into a gigantic franchise? Hmmm … could it be that some poor film executives saw what The Force Awakens did and said, “I can totally do better than that”?

Next up, the heartwarming story about Mr. Frances Alfred Basil Tomlin – “Tom” to his family, and BoShek to us, the guy who refers Obi-Wan to Chewbacca and then disappears into the night. Investigative journalist Billy Jensen broke the story.

Now, can I turn BB-8 into a fondue pot? No, no, no, of course not! Entirely a non sequitur. One of the voice consultants on BB-8, Ben Schwartz, recently revealed that they were working from actual scripted content. (In other words, BB-8 speaks – and speaks real things!)

Meanwhile, how many stoners does it take to fix a lightbulb? How about a better question – how do you get into that, um, state, and then try to sync up Dark Side of the Moon by Pink Floyd with The Force Awakens? Conspiracy theories afoot again! Play it three times through, starting right after the opening scroll, and you’ll find quite a few surprises.

Lastly, Harrison Ford had the Falcon’s door dropped onto his leg, and now, a year and a half later, the UK Healthy and Safety Executive (HSE) says the injury shouldn’t have happened. The HSE is bringing four criminal charges (criminal charges!) against “Foodles Production” (the Disney subsidiary handling The Force Awakens). I’m shocked they didn’t say anything about the First Order’s blatant OSHA violations, including the utter lack of railings to protect workers and scoundrels from precipitous falls.

Yesterday’s answer: The Rathtars killed them all

Today’s question: The X-wings at Yavin and Endor were Incom model T-65Bs – what Incom model are the Resistance X-wings in The Force Awakens?