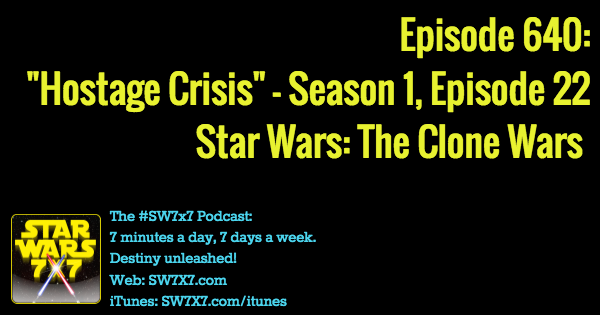 This is it! The final episode of Season 1 of Star Wars: The Clone Wars. In our Clone Wars briefing on episode 22, “Hostage Crisis,” we’ve got a lot of questions that just don’t have satisfactory answers. Like:

1. How come no one else noticed a bunch of bounty hunters shooting up the Senate landing platform?

2. How come Anakin didn’t sense it, even though it was practically right outside his window?

3. How come Anakin gave Padme his lightsaber with the emitter end pointing toward her?

4. How come Anakin didn’t just use the Force to get the lightsaber away from Padme as she left her office with Bail Organa?

5. How come Palpatine didn’t just take a hard line and let Cad Bane kill all the hostages – hostages that were entirely made up of Senators who’d been giving Palpatine a hard time over new and restrictive laws?

6. How did Palpatine not lose his mind being stuck in his office with Senator Taa from Ryloth, and thus be unable to use Force powers to open or knock down the door?

7. Why does Zero the Hutt sound like a bad Blanche DuBois from A Streetcar Named Desire?

I could keep going, but that’s seven, and you know … Star Wars 7×7! 🙂 Still, the introduction of Cad Bane as the new #1 bounty hunter in the galaxy, and someone who’s going to be a foil for the Jedi for a good long while, is a welcome new character.

Today’s question: What are the last words we hear from Obi-Wan during Rey’s “Forceback” vision at Maz Kanata’s castle?