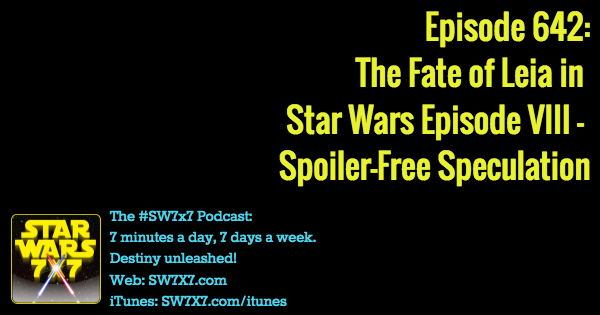 We’re picking back up on our series of spoiler-free speculations about the fates and fortunes of characters from The Force Awakens – what might their story paths be in Episode VIII?

Today we’re talking about Princess/General Leia, and yes, there’s a rumor floating around about Leia and a thing happening in Episode VIII, but if you’re spoiler averse, you have nothing to fear. We’re not going to talk about that here, and what we DO have to talk with you about won’t be affected by that rumor. In other words, for the folks who’ve heard the rumor, we think that we’ve got to share in today’s podcast will be relevant regardless of whether that rumor is true.

1. How will Leia treat Ben Solo/Kylo Ren, now that he’s killed Han Solo? Will she still actively try to save him? Will she want him killed? Or something in between?

2. Will the Republic ask her to step up into a leadership role with them? Will the people who branded her as a warmonger try to blame her for the First Order’s attack on the Hosnian system? How will she operate in the new power vacuum?

As always, please share your thoughts and opinions in the comments!

Yesterday’s answer: It’s George Lucas’ favorite advice to his actors when shooting scenes for Star Wars movies (and maybe for other movies, too!)

Today’s question: What’s the first thing Chewie did upon arriving at the Resistance base after returning from Starkiller Base?