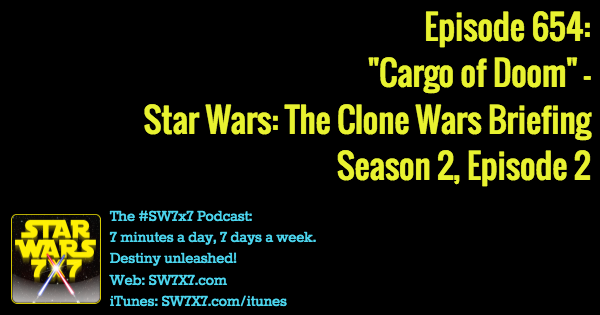 The episode in a nutshell: Anakin, Ahsoka, and the Republic face off with Cad Bane and Separatist forces over Devaron (later of Weapon of a Jedi fame from the Journey to The Force Awakens). The good guys are too late to save Jedi Master Bolla Ropal, who Bane tortures to death while failing to get Ropal to open the Jedi Holocron or tell Bane how to use the Kyber memory crystal for it. Grim! This is kids cartoon? Well, compared to stuff that happened to Wile E. Coyote, it’s probably mild, but the coyote never died, either…

So the Jedi and clones board Bane’s ship, and Bane lures them into a hangar bay filled with battle droids and super battle droids. Bane turns off the gravity in the hangar bay, and a very neat skirmish in zero-g ensues, very well animated. The droids magnetize to the floor, and after Captain Rex reminds his troops they can do the same, they magnetize onto random hangar bay structures and the ceiling itself, which makes for some interesting visual perspectives.

Ultimately, Bane gets away, Ahsoka chases him and gets separated from Anakin. Bane takes down Ahsoka and takes her hostage. When Anakin arrives, she’s behind a force field, and the other side is an airlock door. Bane, flanked by two super battle droids, tells Anakin to open the holocron or watch Ahsoka get flushed out into space. Bane even taunts Anakin, doubting that he can take out both super battle droids and still rescue Ahsoka. So Anakin surrenders, pops open the holocron, Bane puts in the memory crystal, and gets ready to go on his merry way.

That’s when Anakin, frustratingly, decides to try to rescue Ahsoka anyway. He uses the Force to recall his own lightsaber and Ahsoka’s, at which point Bane triggers the airlock. Ahsoka hangs on to the wall inside while Anakin kills the super battle droids, shuts the airlock and turns off the force field while Bane runs off with his prize.

Why didn’t Anakin just do that in the first place, and not open the holocron??? GRRRRR!

Maybe he thought Bane would fight him, too, and he liked 2 against 1 versus 3 against 1 better? I doubt it. Grrr. Anyway, the clones and the Jedi commandeer a Separatist transport to escape the self-destructing ship, and they witness what appears to be Cad Bane getting shot and killed by a clone trooper, his body falling off a catwalk. When Anakin asks the clone trooper if the holocron was recovered, the clone says no, though it sounds not very much like a clone.

Later, Anakin notes that though Bane is dead, he can still feel Bane’s presence. D’oh! That’s because Bane’s in that clone trooper armor, right? Anakin thinks Bane is dead and that the holocron and the memory crystal are lost in the exploding Separatist ship. I’m thinking next episode he finds out how wrong he is. Will it humble him at all? I doubt that, too..

Today’s question: What’s the name of the droid that alerts the Resistance to the presence of BB-8 on Takodana?