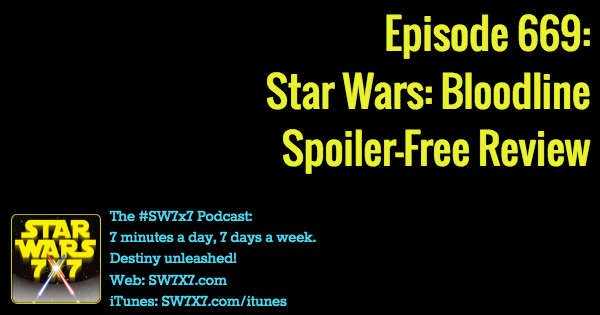 It’s finally here! Star Wars: Bloodline, the major new canon novel from Claudia Gray (of Star Wars: Lost Stars fame), has arrived on shelves and in Kindles and other ebook readers today, and boy oh boy, is it worth the wait.

Now, as of this morning, you probably haven’t read it yet, so we’re going to keep things spoiler-free for a while. Like, a week. 🙂 By this time next week, all bets are off, and we’ll have some major analyses in store for you, spoilers and all.

In the meantime, you can be relieved that the book lives up to the hype, and as for myself, I liked it better than Lost Stars (not a knock on that book, though). If you liked Gray’s ability to develop a relationship realistically and take it up level by level by level, you’re going to be thrilled with the situation in Bloodline. Leia’s relationship with the major new character Ransolm Casterfo is exceedingly well drawn, and completely believable. And the “screen time,” so to speak, that Han and Leia’s relationship gets is everything you hoped for from The Force Awakens and didn’t get. (Well, maybe not everything, but darned close.)

Seeds of the Resistance? Check. Seeds of the First Order? Check and double check (though I have to admit, I’m needing the second read-through to really wrap my head around it). Action, suspense, and surprises? Yes to all of the above. It’s been suggested that some of the posters released in promotion for the book gave some of the plot away, and I’m not 100% in agreement about that – you could go either way in that assessment, and I think what we all know about the events of Return of the Jedi help some folks leap to conclusions that others wouldn’t. And even if it was a giveaway, it’s only giving away a subplot at that.

One other thing we mentioned on the podcast: It’s Star Wars Day tomorrow (May the 4th be with you!), and we’re psyched to let you know that Zebra Imaging is celebrating with $20 off anything in their line of stunning Star Wars 3D Holograms, plus free shipping when you use the promo code MAY4TH7X7.

They’ve got four holograms in their first series to choose from – Kylo Ren, the Death Star trench run, Han Solo in Carbonite, and R2-D2 projecting the Princess Leia hologram message (see below). If you get all four, Zebra will send you a fifth one for free – it’s a mystery one, but they gave a hint about Artoo possibly feeling “threatened” by this new character. So we have a pretty good guess about it. 🙂

Yesterday’s answer: “May the Force be with you.”