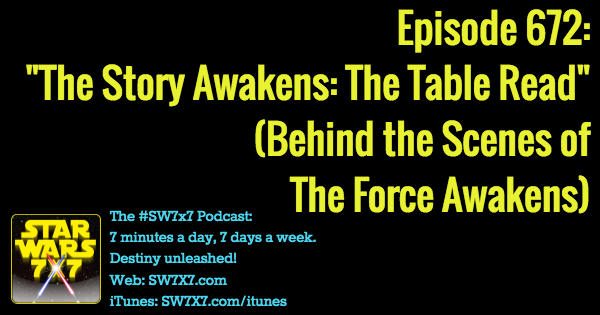 Welcome back! Today we’re talking about “The Story Awakens: The Table Read,” one of the bonus features in the home video release of Star Wars: The Force Awakens. 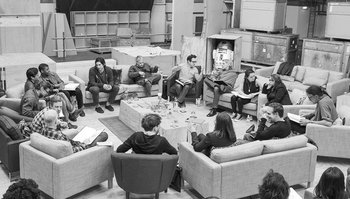 You remember the table read, right? The one where the cast was announced in that unforgettable black and white photo? (Shown at right in case you actually forgot, via StarWars.com.) Yeah, that one.

Well, it turns out the whole thing was recorded on video, too, which shouldn’t come as a surprise. Lucasfilm already has a reputation for saving everything, the way people were instructed to save everything the Beatles were recording for Abbey Road, for example.

Now that table read, I’d pay full price movie admission to watch that from start to finish! Unfortunately, the behind the scenes feature on it isn’t nearly that long, and it also features snippets of interviews with Daisy Ridley, John Boyega, Oscar Isaac, Adam Driver, Carrie Fisher, Mark Hamill, and Harrison Ford, as well as J.J. Abrams, Kathleen Kennedy, and Larry Kasdan. And if you listen closely to the couple of sections where you hear them reading the dialogue, you’ll catch spots that are different from what you heard in the movie itself! Whether that has anything to do with the reworking of the script that happened while Harrison Ford recovered from his injury, we can’t really say. A neat thing to pick up on, nonetheless.

Another interesting thing – Mark Hamill read all the narrative parts of the script during the table read, which was something I’d heard rumored in the past, and that the reason why was that he had little or no dialogue in the movie. Which was something I, personally, never wanted to believe, but I’ve made my peace with it. 🙂

Have a listen to the podcast for the rest of our take on it, and in the comments, let us know – would you pay to see the table read on the big screen?

Today’s question: What’s the last line of dialogue spoken in The Empire Strikes Back?