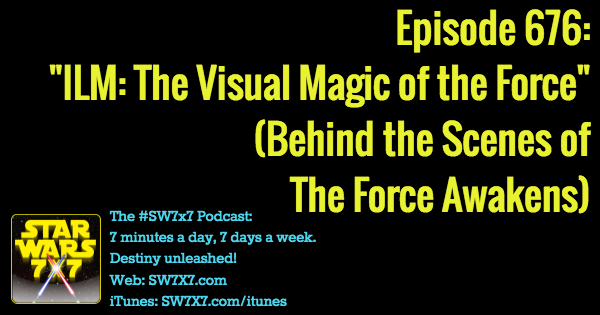 We’re back into our series of looks at the behind-the-scenes short videos from The Force Awakens home video release. On tap this time – ILM and visual effects.

Here’s the best thing about it – how many times they reinforce the notion that the effects are done at the service of story. You get the feeling this is the second part of the behind-the-scenes story that Lucasfilm was telling at SDCC last year, with all the talk about real sets and practical effects. This time, it’s all about the “restraint” in terms of the special effects, and doing just enough to fill any holes in the story.

Is that a pure, in-and-of-itself thing? Or is this another conscious nod to the Original Trilogy fans who weren’t so happy with the Prequels? Hmmm… 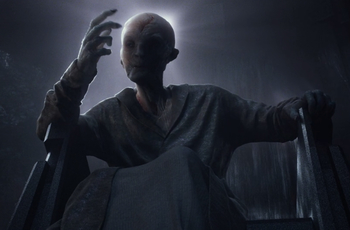 Meanwhile, among a wealth of amazing things you get to see in the video, one of them is the build in progress of Supreme Leader Snoke. I always thought he was pretty hard to see, comparatively, in the movie, so I’ve got a screenshot here for you from the behind-the-scenes video.

As they cycle through the various stages of Snoke’s integration into the screen story, this screenshot shows the last version before the actual screen version, which gives you a better look at his robes and head wound.

In the podcast, you’ll also get to hear a mini-soap-box riff on movie studios learning the wrong lessons from the success of movies like Deadpool, or going to crazy with the technology just because they can.

What do YOU think? Do you think The Force Awakens stayed on the right side of the line when it came to using visual effects, or do you think they took it too far and made something unrealistic? Share your thoughts in the comments!

Today’s podcast is brought to you by the fine folks at Zebra Imaging and their Star Wars 3D Holograms. You can see an animation of the R2-D2 one here, and you’ll also find the Death Star trench run and Kylo Ren at the link above, as well as Han Solo in carbonite. That’s the one I’ll never show my mom, because that scene made her sad. So very, very sad. To this day, even. Yes, it’s that realistic. Check out Zebra Imaging to see them for yourself!

Today’s question: What’s the last line of dialogue spoken in The Phantom Menace?