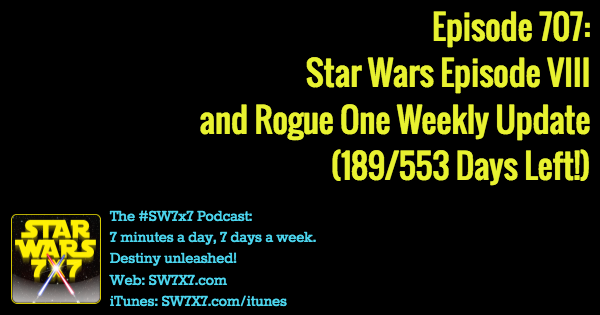 Wow, things blew up pretty quickly on the Rogue One rumors, didn’t they? Well, we’ve gone into the echo chamber for you, and we’ve gotten as close to the sources of these stories as anyone’s gonna get who isn’t a “Hollywood insider,” an “unnamed source,” or a “source close to the production.”

If you want the real deal, these are the stories to which you should be paying attention:

What’s true and false about the reshoots for Rogue One: A Star Wars Story (Entertainment Weekly)

‘Star Wars: Rogue One’ Enlists Renowned Stunt Coordinator for Reshoots (The Hollywood Reporter) – take this one with a grain of salt, since everything in it is couched in the panic-mode language

No, really, Rogue One is reshooting about half of the movie (Latino Review) – the counterpoint, and occasionally had, in fact, the scoop on some things about The Force Awakens

And if you want the take of a super-experienced person on all this foofaraw, check out Bobby Roberts and his latest “Rumor Control” episode for Full of Sith. The podcaster emeritus has come out of retirement to lay down the law about the Rogue One reshoots and what it all means.

With all of this going on, The Onion’s A.V. Club may have had the perfect headline this week:

At least filming on Star Wars: Episode VIII seems to be going well

Meanwhile Rian Johnson took to Twitter to shoot down rumors of filming on Episode VIII taking place in the United States (via Vanity Fair). He also posted a picture with the caption “In the home stretch”:

📷 In the home stretch. https://t.co/AhhJoo4gBI

Naturally, everyone jumped on this and said it was Luke’s cape, but here a picture of Luke in his cape from The Force Awakens. Notice anything different from the one in Rian Johnson’s pic? If you said the string ties, you’d be correct. No string ties below the neck (or anywhere) on Luke’s robe. But clearly they are there in Rian Johnson’s photo. Which make me think they’re not Luke’s robes. Rey’s, maybe?

Today’s question: How many stormtroopers did Poe Dameron shoot on Jakku?