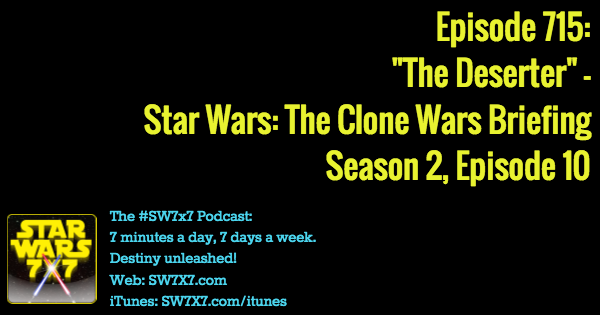 It’s the latest in our Clone Wars Briefing series! Today we’re covering Season 2, Episode 10: “The Deserter.” It’s a comparatively quiet episode, coming on the heels of the action-packed “Grievous Intrigue” from last week, and the second of the two-part story arc.

In a nutshell: Grievous is downed on Saleucami, and has to get to an escape pod with a working transmitter to call for a rescue. Obi-Wan Kenobi takes a bunch of clones down to the surface to try to capture Grievous before he escapes.

And, well, Grievous escapes. Betcha didn’t see that coming. (Here’s the full episode summary on Wookieepedia, which is where the image came from, too.)

While this is going on, Captain Rex is left behind at a local farm to recover from a commando droid’s sniper fire wound. Turns out the farm is owned by a clone who deserted the Clone Army during the Battle of Geonosis in Attack of the Clones. And that starts a series of discussions about freedom of choice (a particularly thorny topic when it comes to clones), self-determination, why one would fight in an army or decide to leave it, and one’s view of his or her place in the larger tapestry of history. Pretty deep stuff for a cartoon, and also not a surprise, given that they’ve never shied away from these “slower” episodes that are less action-packed.

When the deserter’s kids accidentally activate a downed escape pod full of commando droids, Rex and the deserter have to team up to kill them all. Which they do, prompting Rex to say that the clone may be a deserter, but he’s certainly no coward. Which is about as good a compliment as Rex could give, under the circumstances, and Rex chooses not to report the deserter in the end.

Now I’ve never really asked you this question, but I finally did in the podcast, and I will here, too: Do you think this is really a kids’ cartoon, or is it more of an adult cartoon (that can also be shared with kids if desired)? Have your say in the comments!

Yesterday’s answer: Use the Force

Today’s question: What’s the name of the long gun deployed by the First Order to shoot down Finn and Poe’s TIE Fighter in the landing bay?