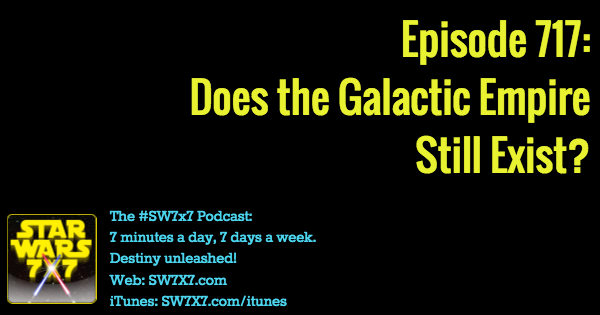 The Empire. Scourge of the galaxy. Thanks to Shattered Empire, Star Wars: Aftermath, and Lost Stars, we know a lot about how the Empire reacted to the events of the Battle of Endor. Despite putting up an angry fight, while crippled by a civil war within their own ranks, the Empire was forced into a treaty with the New Republic – the Galactic Concordance.

As a result, the Empire was confined to a section of space within the Core and Inner Rim worlds, and had harsh sanctions levied against them. But … what happened next? Is the old Empire still out there, nursing its grudge, and waiting for the right time to strike at a weakened Resistance and an obliterated New Republic?

We pursue that line of reasoning in today’s podcast. Have a listen! And let us know what you think – do you want to see a resurgent Empire come into play in Episode VIII, to challenge both the Resistance AND the First Order? Have your say in the comments!

Today’s question: How many rathtars wreak havoc on Han and Chewie’s freighter?